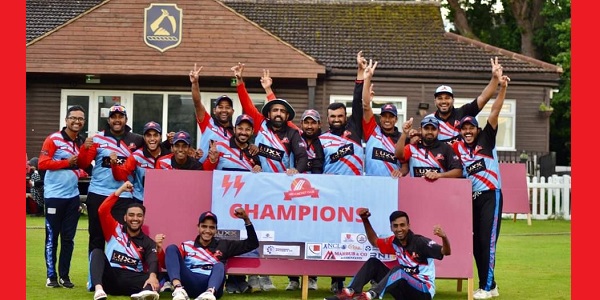 NEO CRICKET CLUB has topped off a highly successful season with their First XI winning the National Cricket League on Sunday in the Diamond Premier Division.

Since cricket was released from lockdown at the end of March 2021, Neo CC have had a busy summer, staging cricket according to government guidelines. The Club has played over 50 games and have up to four senior sides playing every weekend. Neo CC also runs a junior section which trains at Ilford’s South Park three days a week.

Neo CC topped the premier division with a total of 243 points. Alamin scored 361 runs throughout the season with the bat.  Mehad Khan was the highest wicket-taker of the division with 23 wickets. Neo CC skipper Ayaz Karim took 19 wickets, consolidating second position in the table. Out of 14 league games Neo CC won nine and lost only one. Four games had no result due adverse weather during the summer

Captain Ayaz Karim said, “Neo CC side have been the most successful side on the local club scene for a number of years. This is the result of our team effort and the boys worked tirelessly towards this achievement.”

“We could not be more proud of the team and all associated staff and volunteers for their hard work in securing this historic win, especially given the adverse conditions they have had to face. Congratulations to everyone involved and thank you for giving our supporters and sponsors something to cheer about during this difficult year.”

2021-08-26
admin1
Previous: John Reed fun and fitness is coming to Shoreditch
Next: Bishwanath gear up for Upazila Cup!