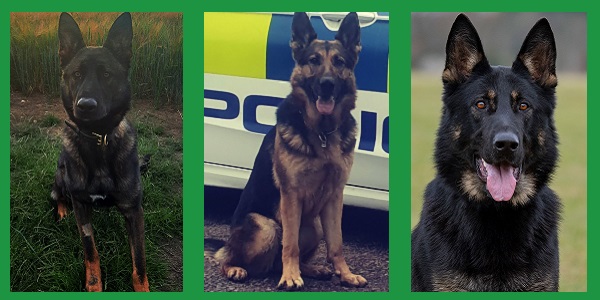 MOST POLICING in London is carried out by human officers in the Metropolitan Police. Sometimes they receive assistance from four legged friends, who make a unique contribution to the fight against crime.

•On Friday, 19th February, at 5.50pm, a vehicle was stopped in Barking – and a man ran off from the scene. Police Dog (PD) Hugo helped to search round nearby gardens and quickly found the man behind a garage.  A quantity of drugs and a Samurai sword were found in the car, and the man was arrested on suspicion of possession of drugs with intent to supply and possession of an offensive weapon.

•Later that day, at 11.30pm, an assault occurred in Redbridge. Two men were seen running off after the incident. PD Nahla got stuck in and helped search gardens in the area. She helped find one suspect – and she also found can of CS spray, which was probably dropped by the suspect. While PD Nahla was searching away, PD Ziggy and PD Sky joined forces to find the second suspect – quickly locating him hiding on a nearby garage roof. Officers arrested him on suspicion of Grievous Bodily Harm and firearms offences.

•On Saturday evening, it was the turn of PD Yara, who helped police search a car in Hackney – and find 30 wraps of Class A drugs. Police arrested two people – and later found more drugs when they searched the driver’s home.

Chief Inspector Graham Horwood of the M07 Taskforce said, “At all hours of the day and night, our police dogs and their handlers stand ready to support their colleagues. It is their training and abilities that helps find the evasive suspect or locate the hidden evidence. Time and time again those guilty of serious offences are brought to justice because of the partnership between our officers and their dogs; both make an outstanding contribution to keeping London safe.”

●Read more about it:
Days of action find Covid rule breakers in Hackney and Tower Hamlets
Hackney revellers sent up the river by Covid regs