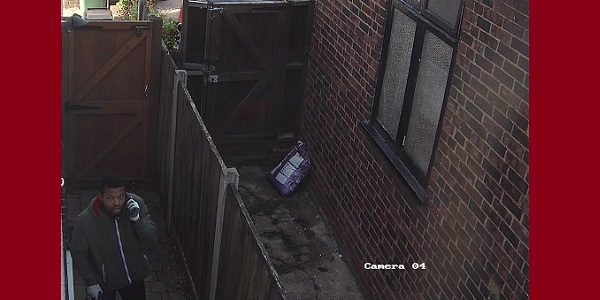 HE IS THE burglar who entered a home in Wood Green but didn’t take anything away with him – with his actions caught on high quality CCTV. Now police want to find out who he is. 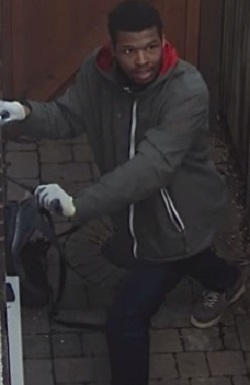 A close-up of the intruder

The incident occurred on 18th October last year. Stills from CCTV footage taken by a camera belonging to the householder have now been released as police appeal for help in identifying the man.

The intruder is described as a black male, approximately 5ft 10 ins tall, with black hair and a beard. He was wearing a green jacket, white gloves, dark coloured trousers and grey shoes. He also had a rucksack.

The CCTV shows the intruder sitting opposite the house and watching it, before going up to the front door and ringing the doorbell. After a while he then climbs over a side gate and into an alley between the house and the neighbouring one. He uses a crowbar to try to break into the property, but this is not successful and he smashes a window and climbs through it, into the property.

The intruder seems to have left the property a short time later, without stealing anything. Police suspect that he broke in to the home to look for keys to a car which was in the driveway.

Detective Constable Dave Van Der Valk explained, “Understandably the occupants were left feeling unsafe in their home and are afraid that they could be the target of another intrusion; we hope someone will recognise the man from the images and come forward so we can find him and bring the victims peace of mind.”

•Anyone who can help identify the intruder is asked to contact the police via 101. Alternatively you can contact Crimestoppers on 0800-555 111 and give information anonymously.