POLICE HAVE released a CCTV image of a man they wish to interview in connection with a sexual assault on a girl travelling on a number 55 bus in Hackney just before 5pm on 17th November last year. 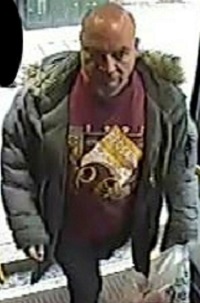 The suspect: can you help identify this man?

The incident is one of five incidents across London which police are trying to clear up by releasing relevant CCTV images. The other incidents were not in East London.

Detective Sergeant Ian Beattie of the Roads and Transport Policing Command said, “Maintaining a safe network for those travelling on buses is vital. Sexual assaults on buses in London are very rare but when they do happen we prioritise supporting the victim and catching those responsible. The technology available to use is very strong.”

Detective Sergeant Beattie encouraged victims and witnesses to come forward and added, “These despicable acts are unacceptable and will not be tolerated. We will continue to do all we can to make bus routes safe for those travelling.”

Mandy McGregor, TfL’s Head of Transport Policing and Community Safety, said, “The bus network is a low crime environment but when heinous acts like these are committed we are relentless in our pursuit of the perpetrators. I would urge anyone who witnessed any of these crimes or recognises the men in the CCTV images to come forward to ensure those responsible face the full force of the law.”

●Anyone who has any information which may assist police to identify the above suspect is asked to phone the police on 101.  Alternatively you can contact Crimestoppers on 0800-555 111 and give information anonymously.

●Read more about it:
Jail for man who assaulted nurse in A&E
Police seek “Good Samaritan” after Ripple Road crash