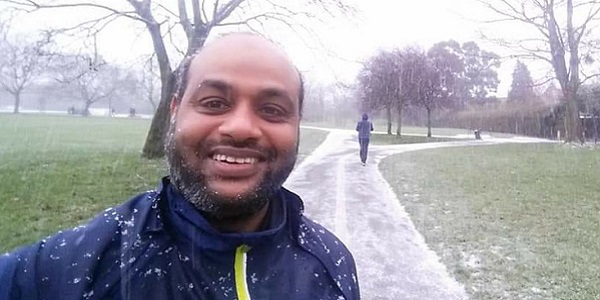 COME SHINE or snow, heatwave or freeze, Redbridge Councillor Khaled Noor goes out for a run on a Sunday. And every Sunday his efforts raise money for the Redbridge Food Bank.

This Sunday, 14th February, it was two runs for the price of one. “Today I felt like running a long distance,” said Cllr Noor. “I complete a ten mile run instead of my usual 5km. This was Cllr Noor’s first ten mile run, and he completed the distance in just over an hour.

This weekend was Cllr Noor’s 45th weekly charity run – in aid of the Redbridge Food Bank. So far this year, the Barkingside ward councillor has donated more than 200kg of food to the Food Bank.

When he is not running for charity, Cllr Noor runs his own legal practice in Whitechapel.  He is now well on target to complete his challenge – a full year of weekly 5km charity runs.  Donations can be made via his JustGiving page.

●You can donate to Cllr Noor’s appeal here:
Donate