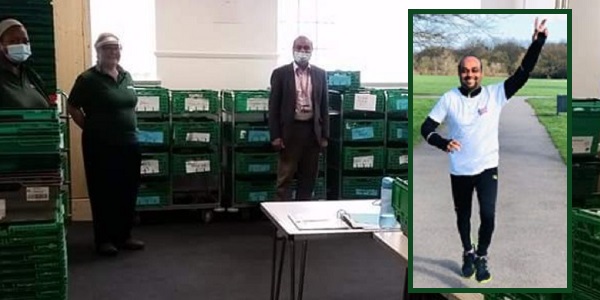 Cllr Noor at Redbridge Food Bank and (inset) on one of his runs.

AS THE YEAR draws to a close, Cllr Khaled Noor of Redbridge Council continues with his regular running to raise funds for a Redbridge Food Bank – at a time when there is a heavy call on its services.

Cllr Noor, who is also a solicitor working in Tower Hamlets, heads out regularly every week, usually completing a 5 km run. Earlier this month, he announced that he had run a distance equivalent to 29 marathons. Why not donate £29 in recognition of his achievements?

●To donate to Cllr Noor’s fund for the benefit of the Redbridge Food Bank, go to:
Donate now

●Read more about it:
MPF explores the Islamophobia behind Prevent
Facing up to the new cover-up