Don't Miss
Home / Featured / Scintilla get their hands on the cup! 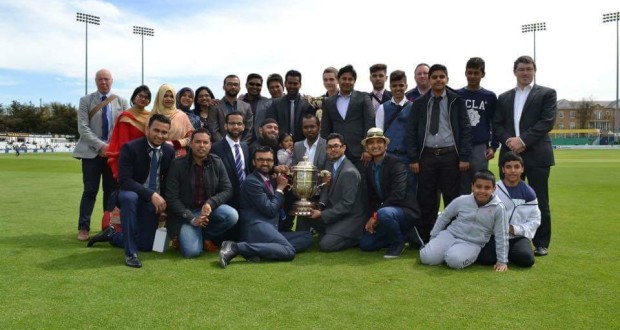 Scintilla get their hands on the cup!

Scintilla Cricket Club were honoured for their extraordinary 2014 Premier Division triumph as the Barking & Dagenham team were invited to The Essex county ground to watch Essex Cricket Club continue their push for promotion in their County Championship fixture against Gloucestershire.

The team was invited onto the pitch at lunch where the famous trophy was presented to them by Essex left hander Nick Browne – the first Essex player to score two unbeaten hundreds in a championship match in the same game (against Derbyshire at Chesterfield).

Eastbury School in Barking & Dagenham have supported Scintilla by allowing them use of the club’s cricket facilities for youngsters, and tributes were paid to the school at the presentation. The school’s Sports Liaison Officer Mick Rose and Head of PE Rhys Davies attended the game and ceremony. Mick Rose said: “We were looking for a local project and team to partner with, and Scintilla Cricket Club ticked the boxes. It has been a pleasure working with this team. Congratulations for the on-field success.”

Abul Hussain and Ashfaqur Rahaman Nobel were awarded trophies as joint players of the year and Rokhan Khan, 16, was selected as young player. “The dedication from these players has been excellent. It was hard making choices as all our players played out of their skins,” said current first team skipper Ayaz Karim.

Club captain Ahmed Choudhury thanked the team for their efforts: “We have always dared to dream and standing here on the turf of this historic ground today while receiving this grand trophy is the fulfilment of a dream. Thank you to Techshed Ltd for the financial support that has kept us afloat and allowed us to prosper on the pitch.”

Sushanta Das Gupta from Techshed Ltd said: “It has been a pleasure to support the team. I wish you further success and hope our partnership continues for a long time.” Club Chair Muhammad Rahman added: “This is the result of years of blood, sweat, tears. As far as I am concerned we have had a taste of elite success and it is important that going forward our focus remains on the current season. It will be harder this time and every game will be a cup final. A massive thank you to Graham Smith from Essex Cricket for providing us with valuable expertise, support and advice.”

2015-05-05
admin1
Previous: Is this the man who can halt the Labour shoo-in?
Next: Sport and young people: a winning combination