Don't Miss
Home / Featured / Is this the man who can halt the Labour shoo-in? 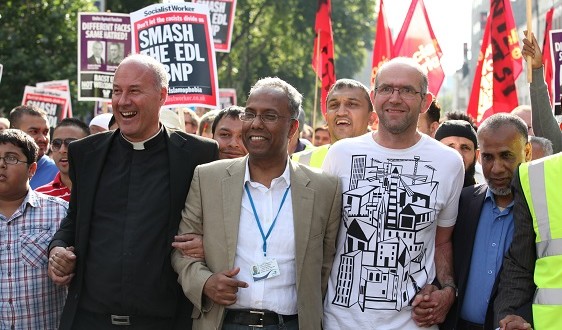 Glyn Robins (right) with Mayor Lutfur Rahman and the Rev. Alan Green - out demonstrating against the EDL.

Is this the man who can halt the Labour shoo-in?

Are we on the brink of another Labour upset? Three weeks ago it seemed self-evident that the borough’s sitting Labour MPs would walk through to victory at the General Election. That was before the election court verdict in the case against Mayor Lutfur Rahman. Labour candidate Rushanara Ali seems reluctant to comment on the verdict, but Labour figures such as John Biggs AM and Cllr Rachael Saunders have spoken out, giving the impression that the whole party is delighted with the verdict. On the other hand, such is the anger about the verdict that a growing number of voters are looking for an alternative candidate whom they can back at the General Election. And most of them are declaring that they will be backing Glyn Robbins, who describes himself as “the socialist candidate” and who is supported by the Trade Union and Socialist Coalition and by Left Unity.

Glyn Robbins is no stranger to politics: he’s been an activist for all his adult life (and for a while before then). He joined the Labour Party at the age of 16 – and was a loyal member for around a decade, during which he felt he saw the Party’s commitment to socialism crumble. When he reached the point that he felt that the official Labour Party could not be changed, he left. Although he did not join any other party, he tried to fight for a better and fairer future for all by concentrating on single issues and campaigns.

There were three reasons why Glyn stood as a candidate in this election.

•First, he wanted to unite the left and people with a progressive agenda in the borough.

•Second, he wanted to challenge “New Labour” – although they are a mainstream party, their policies now are offering working people very little, certainly little different from the Tories. Glyn doesn’t relish an argument, but he does feel it is not fair for Labour to take centre stage as if their policies could not be criticised, so he is trying to help voters call the Party to account.

•Third – and this is they key motivation for Glyn – he wants to put forward a positive, progressive, political agenda which can unite working people in all our diversity and say “there is an alternative”. It’s not such an unusual or rare desire. The people of Greece have just elected a political party which has only just come into existence and it’s now formed the Government. It has different policies from the mainstream parties – but they have turned out to be very popular. Glyn wants to see Bethnal Green & Bow voters given a real choice too: “There’s no point messing about with new labels, as what we need is to change the whole tin,” he says.

The policies that mean most to Glyn are housing, the NHS and Palestine. He’s worked for years in housing and always been a keen campaigner. He campaigned, with others, to stop the Labour Council transferring its housing stock to housing associations in the first few years of this century. The campaign saved many estates. Where it was not successful, residents are finding out that the majority of housing association landlords are just as inept (or worse) as campaigners warned they would be. Indeed, so widespread are the problems with the new landlords that even the Labour Party is now talking about how dreadful the service is – without acknowledging that their sell-offs caused the problems. “I’m not into the politics of ‘I told you so’,” says Glynn, “but I did; and we need to see real action to tackle the business operations that housing associations are today – not just crocodile tears.”

Glyn stands by his positive agenda and he is delighted that so many activists have contacted him and asked to help him put the message across that he has been able to put out leaflets and knock on doors across the whole borough.

However, he also acknowledges that many people may want to vote for him as a protest vote, to express their anger over the Election Court verdict. “In some ways,” he says, “Lutfur Rahman, Tower Hamlets First and I do have a very similar political agenda. We believe that this country’s resources should be used more fairly and that the vulnerable people in our society should not have to pay to bail out the bankers. We believe in a fair world, where diversity between and within nations is celebrated and everyone has a right to a home, freedom from hunger, healthcare and dignity. That’s something really worth fighting for.”

There’s no doubt many electors are attracted to Glyn’s programme – and also that many want to protest over the election court verdict. Bethnal Green & Bow has caused an upset before. If enough people actually act on their alternative beliefs and carry out their protests, we may see another upset in Bethnal Green this week.

2015-05-04
admin1
Previous: Rushanara stands on her record: is it up to scratch?
Next: Scintilla get their hands on the cup!