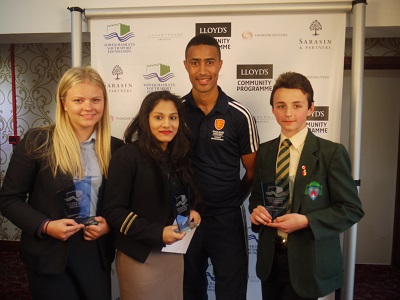 Despite such an array of high profile names, the golden stars of the evening were the young achievers, selected from some of Tower Hamlets’ finest young athletes.

Rushanara Ali, Labour candidate for Bethnal Green & Bow in the coming General Election, kick started the evening, saying “This is one of my favourite evenings of the year. I am actually in awe of the achievements of all the young people sitting in front of me.”

Speaking exclusively to East London News, cricket legend Graham Gooch said: “Success is an inside job. The young people have achieved brilliantly. Moreover, they have great mentoring and support and their sporting future looks good.”

Former Canary Wharf Sports Personality of the Year Scarlett Mew-Jenson won the Diving Performer of the Year category. The 13 year old is already representing Team GB. “I’m working hard and I dream of competing in future international games,” she said.

Ex-West Ham player and Dagenham & Redbridge captain Anwar Uddin said: “It’s all about support, dedication and nurturing. The young people here make us proud to be a part of all of this. We have a proud heritage of sports success and tonight is testament to the character of our young people. They don’t always get the credit they deserve but the achievements of this crop will inspire countless others.”

Male Para-Athlete of the Year was Denzel Akhigbe, winner of a gold medal in the standing long jump at the 2014 London Youth Games with an outstanding 2.43m jump.

Winner Olivia Piechota is currently the top ranked British Judoku in her age bracket. She said: “I am so happy to just be performing on an international stage in my chosen sport, Judo. I hope I can be a role model for others to follow.”

Hockey star and coach Darren Cheesman offered insight into an athlete’s sporting journey: “I started off playing football with ‘Arsenal in the community’ but found my niche in hockey. It is important to be flexible and work hard. Your dedication will pay off and you will enjoy great adventures in life. Nothing is impossible.”

Jodi Jones was the Male Athlete of the Year. Jones making his name as a professional footballer for Dagenham and Redbridge, for whom he signed for in 2013 and where he became the club’s youngest ever Football League player just weeks after his 17th birthday.

Taslima Begum won the weightlifting award. The excited youngster said: “I want to thank my trainer Rich Kite for all the hard work, dedication and encouragement. I took this sport up as a GCSE subject and haven’t looked back. Thank you to everyone for their support.”

West Ham Manager Sam Allardyce added: “It’s been a great evening listening to stories about the achievements of these young people. Well done to THYSF for nurturing and supporting such talent and long may it continue.”

Gail Emms MBE achieved huge success at badminton. She is a former world champion and won a mixed doubles silver medal at the Athens Olympic Games. She said: “It’s been a totally inspiring evening and I think I am a little star struck witnessing the achievements of those in this room today.”

Judoka Ian Rose said: “Success doesn’t come easy. It took me more than two years to get my first medal. I suffered with bullying and self-esteem. I beat it with the love and support of those around me. Stick to your game plan and never be afraid to be ambitious.”

Zakir Khan, Head of Community Affairs at Canary Wharf Group, said: “It’s been wonderful to have been invited here tonight to celebrate young people. Sport brings about a unique sense of joy and I hope that the winners will take up the baton and inspire many more to follow their paths. Well done to Tower Hamlets Youth Sport Foundation for all the hard work.”

This year Tower Hamlets Youth Sport Foundation introduced three new awards: Outstanding Contribution to Tower Hamlets Sport, which was awarded to Alf Vickers for the valuable work he has done with up and coming talent in the borough for a number of years; Most Improved Performer for both male and female performers of Primary School age, which were awarded to Edward Fall from St Mary & St Michael’s Primary School and Fabbihah Yasmin-Ali from Marion Richardson – two young athletes with identifiable talent and very promising careers ahead of them.

This new award was sponsored by the Worshipful Company of Curriers, alongside the Coach of the Year Award. It is with the generous support of the sponsors that the Tower Hamlets Youth Sport Foundation is able to reach so many young people in the borough, and the Foundation would like to extend its thanks to all those who supported the evening. Awards were also sponsored by Chaucer, Hampden and the Worshipful Company of Coopers, while many other generous supporters attended the fundraising dinner that followed the event.

Chris Dunne, the Chair of Trustees for the Tower Hamlets Youth Sport Foundation, spoke about how the young people being celebrated at the Awards Presentation should be proud to not only act as role models to other young people in the borough, but also as living proof that young people everywhere are capable of fantastic achievements when given opportunities like those offered by the Foundation. He said that to overlook such clear examples of engaged and focused young people is to do them a huge disservice.