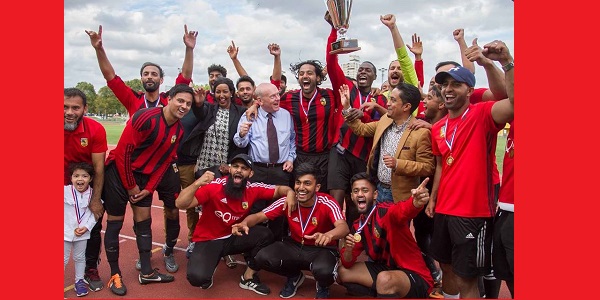 SCINTILLATING SHADWELL FC are champions of the Tower Hamlets Mayor’s Cup after defeating Ace in a thrilling final at Mile End Stadium.

The legendary East End team came back dramatically after staging and completing a 2-0 comeback in the last two minutes of normal time through a Shiblu Miah strike and a David Vaughan own goal.

With the momentum swinging towards Shadwell, Sadiq Ahmed’s men held on to win a pulsating penalty shootout 5-4 with the very last spot kick.

Ace had themselves had squandered a penalty after just three minutes and the miss ultimately proved costly despite going in 2-0 up at half time. Shadwell struggled to breach the Ace goal thanks to some fantastic saves by keeper, Raul. Ace also had many chances to extend their lead in both halves but failed to finish off good build up play.

In the second half Shadwell FC looked more balanced, but they were thwarted again and again by Raul in the nets. Resilient and industrious Shadwell grabbed one back with less than 20 minutes remaining on the clock, and with barely two minutes left David Vaughan miskicked to send the ball flying into the back of his own net.

Both sides then converted their first four pens in the shoot-out before Chakka, who had missed the Ace penalty earlier in the game, failed to score again – leaving Bobby Redwood to slot home the winning penalty.

After captain and man of the match Ade Oshodi received the winner’s trophy from Tower Hamlets Mayor John Biggs, celebrating Shadwell manager Sadiq Ahmed said, “We never give up and even when we were 2-0 down we didn’t let our heads drop. It wasn’t an ideal situation by any means but our never say die spirit showed through. On that basis we are more than deserved winners of this great trophy.”

•Read more about it:
Football curry kings battle it out for charity
My love of non-League football