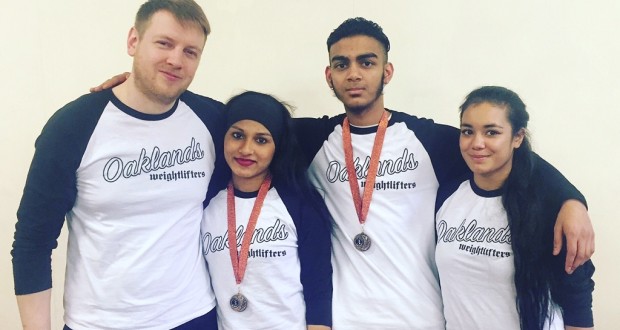 The Oaklands Weightlifters fielded three stellar athletes at the first session of a three-part London Junior Weightlifting Series this weekend. Taslima Begum, Ubayda Choudhury, and Afreen Akthar appeared in the Tower Hamlets Youth and Junior Weightlifting Club’s colours at round one of the competition, held at Crystal Palace.

Ubayda and Afreen, aged 16 and 13 respectively, were making their competition debut.

•Ubayda was in the first group, competing as an under 62kg lifter. The youngster finished third after managing to snatch 40 and clean and jerk 63, giving him a 103kg total and granting him third place in his group.

•Afreen has not missed a single lift so far in her young career and maintained her proud record after competing in the under 58kg women’s event. She finished with a total of 65kg and qualified for the U15 British Age Group Championships.

•Taslima is fast becoming an emerging talent and used this competition as a test run for next week’s competition, the English Weightlifting Championships. She went out with a goal to hit 115kg total at under 48kg bodyweight, which she achieved in only five of the six available attempts, also qualifying her for the British Senior Championships.

Congratulations go to all three of our home grown champions!