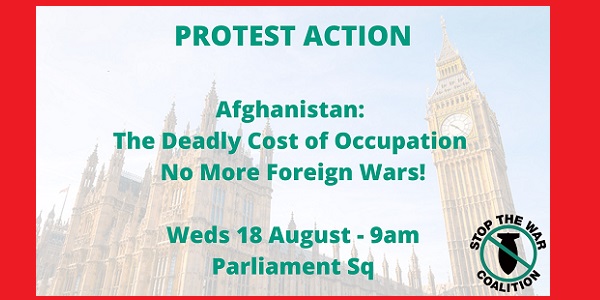 AS BORIS JOHNSON recalls Parliament on Wednesday, 18th August to discuss the situation in Afghanistan, the Stop the War Coalition has called on activists to remind MPs that they were warned against military intervention.

The invasion of Afghanistan took place 20 years ago, after “9/11”. The western allies found it easy to over-run the country, but impossible to control it or convert it to western forms of government. Now we are back at square one – with lives lost and millions of dollars spent in vain. The concern now is that party leaderships will want to cry crocodile tears over the plight of the Afghan population now the Taliban has returned – rather than admit their culpability for the current situation. The Stop the War Coalition wants to challenge them and hold them to account for their decisions. Details of the protest are in the graphic above.

●The Stop the War Coalition sets out its case in the following documents (click to read):
Summary statement
The crisis in Afghanistan is further proof that the War on Terror is an Utter Failure
The legacy of the western occupation of Afghanistan