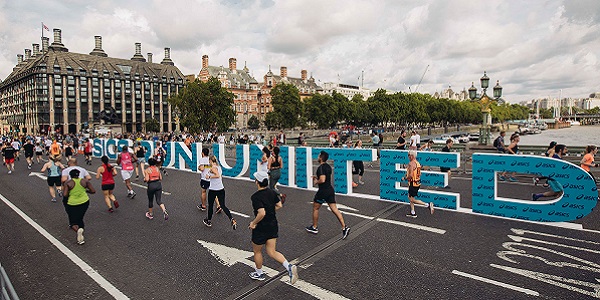 THOUSANDS OF RUNNERS took to the streets of Westminster on 21st July at the ASICS London 10K 2019, presented by Virgin Sport.

The race encouraged people to “run united” to highlight the inclusivity and openness of the city – a message heard by nearly half the runners who, between them, supported over 300 charitable causes raising an estimated £2.2m.

The route was brought to life by the sounds of live bands and DJs at every 450 metres, which kept runners moving as they raced past the Capital’s most iconic and historical landmarks such as Westminster Abbey, Big Ben, the London Eye and River Thames.

Male winner, Josh Griffiths said of his time, “Virgin Sport and ASICS put on such a great race today, the crowds were so supportive, and the event was really exciting. Well done to everyone who finished and everyone who achieved their goals!”

Female winner, Rebecca Murray said, “It was a great race. The course was great, and there was so much support. This is a fast course and has always been one of my favourites!”

Cathy McGinnis, Marketing Manager of ASICS UK, said: “ASICS doesn’t view running as an elitist sport. We’re here to encourage everyone to get up and run – and partnering with Virgin Sport for the ASICS London 10k made perfect sense. It’s an epic yet inclusive route for all runners and we were very excited to see London unite today”.

JUST Goods provided recyclable JUST Water cartons at the finish line, eliminating 19,000 single-use plastic water bottles. The JUST Water carton is made primarily from paper and is 100% recyclable. An additional 40,000 plastic bottles were removed from the route and replaced with 100% recyclable paper cups. All Virgin Sport running events in 2019 are plastic bottle free, eliminating half a million single use bottles for the Hackney Half, ASICS London 10K and Oxford Half courses.

Ira Laufer, CEO of JUST, said, “JUST is incredibly proud to join efforts alongside Virgin Sport at the ASICS London 10K to reduce plastic at the event. Together, we aim to inspire and show that a small change, such as changing your bottled water to a more sustainable option, is something we all can do to create a positive impact on our planet.”

Upcycled finisher T-shirts
The ASICS London 10K finisher T-shirt was also made using recycled PET bottles. This is part of one of ASICS’s projects that includes collecting used gear and partnering with organisations such as Worn Again to support technical development and scale up the recycling of used textiles into new textiles.

ASICS encourages Run United
A celebration of all abilities, the event for ASICS saw the opportunity to celebrate the things that bring us together. The true performance brand encourages people to “Run United”, with the aim of showing that when people run together, amazing things happen – be that faster, further or just with a smile on their faces.

•In the lead up to the event, ASICS explored the real life stories behind why people run. You can view the inspiring video here:
https://www.youtube.com/watch?v=T-xTNk6HhRE&feature=youtu.be

•Pre-registration for the 2020 edition of the ASICS London 10K is open now. Applications are open to all British 10K and ASICS London 10K participants. For runners who have taken part in previous races, Virgin Sport has introduced a new loyalty rewards scheme. Find out more and apply at:
https://www.virginsport.com/event/asics-london-10k-2019