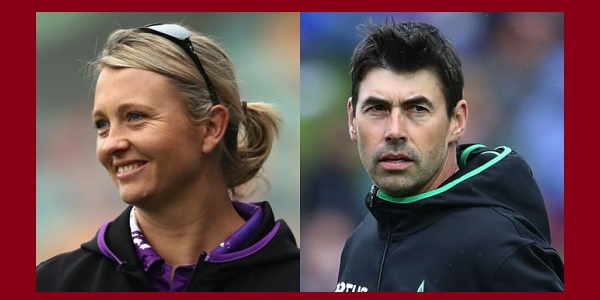 Two new coaches for The Hundred

THE HUNDRED is a new cricket championship – due to be launched next summer. It’s a based on teams from the cities of Manchester, Leeds, Nottingham, Birmingham, Cardiff and Southampton and two from London.

The teams will play matches based on innings of 100 balls over a five week period, in separate men’s and women’s competitions.It has now been announced that Salliann Briggs and Stephen Fleming have been appointed as head coaches for the team based in Nottingham.

Former New Zealand captain Stephen Fleming is the most successful coach in the history of the Indian Premier League, winning three titles with the Chennai Super Kings. He returns to Trent Bridge where he skippered Nottinghamshire to the 2005 County Championship title.

Grimsby-born Salliann Briggs was coach of Loughborough Lightning from 2016 to 2018 and led her team to Kia Super League Finals Day for the first time in 2016. She is currently coach of the Hobart Hurricanes in the Women’s Big Bash League in Australia.

Stephen Fleming said, “I am looking forward to returning to Nottingham. It was a special part of my career and it allowed me to fall back in love with the game. My memories with Nottingham and Trent Bridge are outstanding.”

Salliann Briggs said, “It’s a great opportunity and I’m really looking forward to getting started and building the team. When The Hundred was first announced I was struck by how it was different from the IPL and the Big Bash and I thought it was a great idea to create something different from those tournaments, rather than attempt to compete with them.”

Sanjay Patel, Managing Director of The Hundred, said, “Stephen is the most successful coach in IPL history and Salliann has made a real impact at the Loughborough Lightning over the past few years. It is great to have their knowledge and expertise as part of the first year of The Hundred.”

2019-09-11
admin1
Previous: The sweetest day out
Next: Run Victoria Park with The Race Organiser