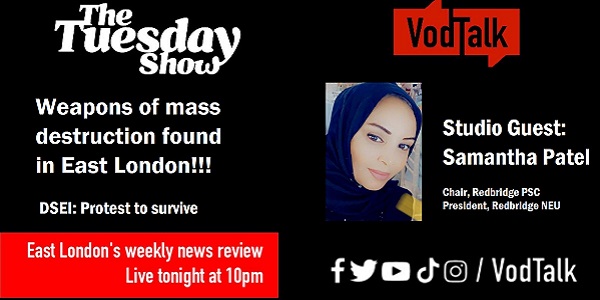 THEY ARE HERE. Hunkered down in the Excel Centre are a shedload of arms dealers – with their models and plans and their displays. Headed towards them is a gaggle of potential mass murderers, wallets at the ready, arming themselves…

“Defence and Security Equipment International” (DSEI) takes place at the Excel Centre in Newham from Tuesday 14th to Friday 17th September – under the slogan “Powering Progress; Defining Your Future” (arms dealer-speke for “mind that tank heading towards you”).

The Exhibition is where the world’s dictators and despots – and more than a few owners of shady private armies – go to buy weapons. The tanks and helicopters, the guns and missiles are seldom used to defend a country against in invasion. More often than not, governments will use the equipment and services they buy at DSEI against their own people. Ludicrously the “D” in “DSEI” stands for “Defence”. In the real world, the “D” stands for “death”. It’s not like you walk into the Fair and try to buy a Very Big Gun because you want to have a game of rounders with your kids in Victoria Park, is it?

No one does an Equalities Impact Assessment of who suffers most from the sales made at DSEI. What we do know is that the poor, BAME citizens of the world and those who speak up against the status quo will suffer the most. To help the arms trade on its way, the UK Government is doing all it can to facilitate the Arms Fair. It has even waived quarantine requirements for double-vaccinated visitors from the UK and Europe.

The event at Excel is more than just a sales convention. DSEI 2021 will “connect governments, national armed forces, industry thought leaders and the entire defence & security supply chain on a global scale. With a range of valuable opportunities for networking, a platform for business, access to relevant content & live action demonstrations, the DSEI community can strengthen relationships, share knowledge and engage in the latest capabilities across the exhibition’s Aerospace, Land, Naval, Security and Joint Zones.” (DSEI website)

Who knew there was a “Joint Zone”? Perhaps we should make a citizens’ arrest. The exhibition will not be the only place where “live action demonstrations” are taking place – but are these protest sessions enough? The event takes place just days after the women’s March to Greenham Common which led to the peace camp in protest at the deadly US Cruise Missiles kept there at the time. Perhaps we need to organise in between the Fairs, which are held every two years to keep the issue alive.

Excel is a privately owned exhibition centre, and East London Councils have no power to stop it accepting whatever events it wants – but these Councils do have the power to stop hiring it themselves. Tower Hamlets Council regularly hires the Excel centre for its election counts (to try to make it difficult for voters to attend): this could stop. Campaigns could be run against other exhibitors to book the centre, who may not know whose footsteps they are following in.  If Excel did not find it so lucrative to host an arms fair because of loss of other bookings, it may reconsider.

●Protest actions at Excel, nearby and online are running this week. See them here:
Stop the Arms Fair

●Read more about it:
June 4th – “we shall never forget”
MPF calls for Rohingya aid after Cox’s Bazar fire