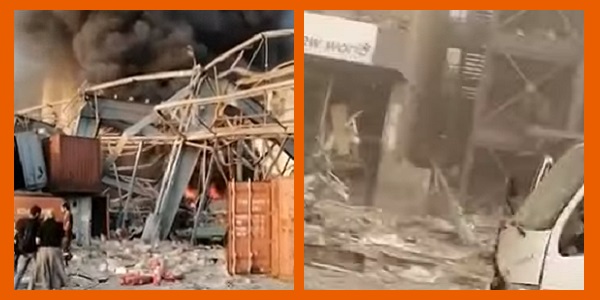 Scenes of devastation after the explosion

THE DEATH TOLL is at least 100. The injuries are almost more horrific: an estimated 4,000 have needed hospital treatment, some in a critical condition. The health service, already struggling to cope with Coronavirus, is overwhelmed.

Throughout the night, humanity was the victor. Hospital workers were seen dividing into teams: one team digging colleagues out of the rubble of their own hospital; the other team receiving ambulances and triaging and treating the injured in the car park. Locals were compassionate and resilient – and not too proud to call for help from the international community. We must give it.

It is becoming accepted that the cause of the explosion in the port area of Beirut, capital of Lebanon, which took place yesterday, 4th August was a massive 2,750 tonnes of ammonium nitrate – a chemical used as a fertiliser and also as padding in explosive devices, as it is so combustible. It makes bombs bigger.

The load had, it seems, been taken off a ship six years ago because it was an unsafe cargo. It was then stored in a warehouse. Maybe no one knew what else to do with it. Hindsight is a wonderful thing: it was an accident waiting to happen, but not a priority in troubled Lebanon.

First there was a fire, possibly caused by a spark coming from someone welding something. The fire ignited the ammonium nitrate, which exploded with a force equivalent to that which would have been produced by a small nuclear bomb – although only conventional substances were involved.

The immediate area was flattened. A wider area was devastated. Across much of Beirut windows blew out and buildings were damaged. Most of the injuries were caused by falling glass, metal and bits of buildings – sometimes whole balconies blow off their buildings by the force of the explosion – rather than by the explosion itself.

Ambulances were impeded by mounds of rubble and shattered glass on the Beirut roads and the thick smoke that filled the streets. More ambulances piled into Beirut from across the country, and appeals went out for blood donors anywhere in the country to donate – urgently. Buildings miles outside Beirut were shaken. The noise of the blast was heard 150 miles away in Cyprus: too far away to see the smoke, people initially thought there must have been an earthquake.

Can no one cut Lebanon a break? It’s due one – overdue one. It’s accommodated hundreds of thousands of refugees. It’s been a stage for various political factions to try to win support by violence rather than dialogue – not least because distant superpowers fund client groups to continue the conflict. And it’s a beautiful country.

It was struggling anyway, trying to deal with the Coronavirus crisis and a seriously faltering economy which was inevitably stoking civil unrest. The blast could break it. Can we let that happen?

●Islamic Relief has opened an emergency fund for Lebanon – though others may be launched soon. You can donate to the Islamic Relief fund here:
Donate