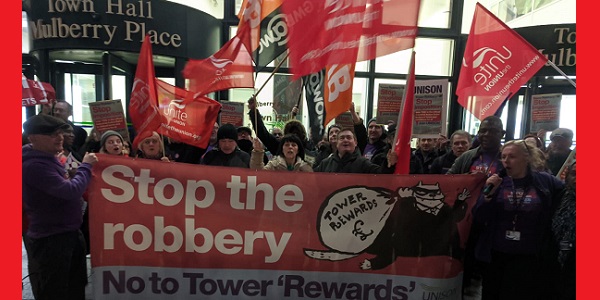 MYSTERY SURROUNDS Executive Mayor John Biggs’s failure to provide an Equality Impact Assessment (EIA) of the new pay package and terms and conditions changes known as “Tower Rewards” to unions or the press.

The concern now is that Labour Councillors, who are in the best position to persuade the Labour Executive Mayor to take action, have not joined the call for him to ensure an EIA is done. It is not clear whether their silence implies endorsement of John Biggs’s tactics, or just a recognition that he holds the strings of power. However, at this late stage, their silence does make them complicit.

Tower Hamlets Unison recently summed up its concerns by pointing out, “Staff below SO2 (the majority of the workforce) get no pay increase but do suffer detrimental changes. Staff in these grades are more likely to be women or BAME and more likely to live locally.” The Council has given Unison some information about the workforce, but experts at the national union say that it is far too general for the equalities impact on the workforce to be assessed.

The union has asked the Council to provide a list of the number of staff on each grade, together with their equalities data (anonymised). This has not been forthcoming. The Equality Act 2010 requires public authorities (such as the Council) to have “due regard” to a number of equality considerations as it goes about its business. Authorities are required to show how they have discharged this duty, and most produce EIAs to fulfil this requirement. Without an EIA, then, it is not at all clear how Tower Hamlets Council believes it has discharged its duty to have regard for the “protected characteristics” when planning Tower Rewards.

The email went on to issue an invitation to Executive Mayor John Biggs to be a guest on 20:20 Vision, a weekly News vodcast on the Vodcast channel. No answer has been received to either question, and ELN will keep trying to get one.

In the meantime, all that we can suggest, dear reader, is that you contact your Councillor and ask them to ask the Mayor to produce an EIA and hand it over to the trade unions. Perhaps they are not aware that the Council has not produced an EIA: perhaps they have been too busy supporting the Black Lives Matter movement to consider how the actions of their Executive Mayor are affecting black workers here in Tower Hamlets.

Time is short. The unions were about to take strike action when the Coronavirus Lockdown began – and they suspended the strikes in order to help local people through the crisis. With the lack of action from the Town Hall, the strikes are back on the agenda – and could begin as early as July.