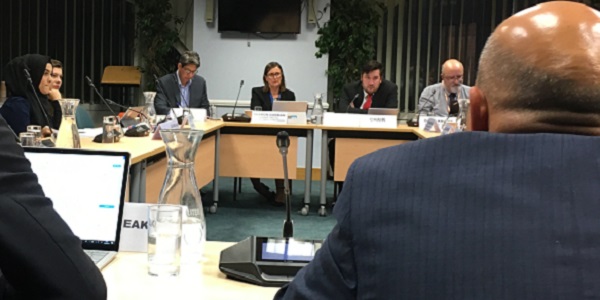 Deputy Mayor Cllr Siraj Islam, standing in for John Biggs, waits to be questioned by the Overview & Scrutiny Committee.

COUNCILLORS IN Tower Hamlets have asked Executive Mayor John Biggs to think again about how the Council’s housing stock is managed. Their main concern was the very flimsy consultation exercise on which the Mayor relied when he took his recent decision to keep housing management out of house for the next eight years.

At the turn of the century Tower Hamlets Council tried to turn its housing stock over to housing associations, tasking them with bringing the stock up to the Decent Homes standard then newly set by the Government. They found it difficult to persuade all tenants to leave the Council, and eventually stopped trying. At that point they set up an arms’ length company (ALMO) – Tower Hamlets Homes (THH) – to manage the remaining stock.

Tower Hamlets Homes’ contract has been extended a number of times and, at present, is due to expire in July 2020. Some months ago, John Biggs commissioned a housing consultants Altair to draw up some options for the future. Altair began with a fact finding exercise – talking to residents to find out how the services THH provided were regarded. They produced a lengthy report with three main options.

The Mayor then decided to extend THH’s management contract for eight years (with a break clause after four years). He wrote to all THH residents asking for their views on this within four weeks – before confirming his decision at a recent meeting of the Cabinet.

This decision was “called in” by five councillors, which mean that it was considered by the Overview & Scrutiny Committee (O&S) – at a meeting which took place last night (14th August). O&S call-in meetings follow a set formula under a strict time limit, which does not really allow for much free ranging discussion. However, even with these constraints, O&S managed to have a great deal more discussion than the Cabinet where John Biggs announced his decision.

The issue of greatest concern to councillors at O&S was consultation between the Mayor and residents. The councillors who called in the decision suggested that the THH management contract be extended for just two years – and then the two years should be used for the Council and residents to sit down together and look at how they would like the Council’s housing stock to be managed.

In the end, the councillors on O&S who heard the call in decided that the consultation John Biggs had carried out was inadequate for the purposes of taking the decision to extend THH’s contract by a massive eight years – but they did not favour the alternative of the Council and residents sitting down together to plan the future.

The Committee therefore asked John Biggs to suspend implementation of his decision until January 2020 and to use the autumn to consult more widely with residents before then re-considering his decision at the January meeting of the Cabinet.

This was a positive outcome for those who live in Tower Hamlets property, and for the councillors who are trying to ensure that homes are managed well. However, O&S requests to the Mayor are merely that – requests. John Biggs is not required to comply. Residents and councillors alike are now waiting to see what notice John Biggs will take of the O&S request.

The next Council meeting is 18th September, with the next Cabinet meting due a week later, on 25th September. It is presumed that the Mayor’s decision will be announced in writing rather than waiting for either of these meetings.

•Read more about it:
Biggs deep in controversy over political use of parks
Biggs enters second year rewarding loyal followers