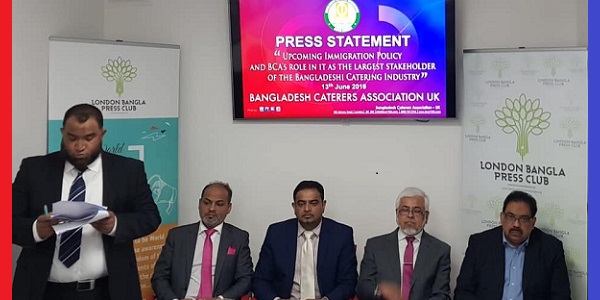 THE BANGLADESH Caterers’ Association (BCA) has welcomed an announcement from the Migration Advisory Committee (MAC), which has pledged to recommend a relaxation in government immigration policy.

MAC advises government on how to change immigration policy. With Brexit on the horizon, MAC has been working overtime to help the Government find a new policy ready for the time when the UK finds itself outside EU rules. In particular, MAC is reviewing the Shortage Occupation List (SOL) – the list of occupations which find it difficult to meet their labour needs by recruiting solely from the UK and (currently) the EU.

What MAC has called for in the first instance is to call for take-away restaurants to be allowed to appoint chefs from outside the EU area – just as eat-in restaurants can do. It is this statement which the BCA has welcomed. However, chefs have to show that they would be earning £29,570 a year if they came to work in the UK. Many restaurant owners are reluctant to pay such salaries and incur the National Insurance costs on top. The BCA is calling for the pay threshold to be reduced to £18,00 a year – a move which would not be popular with staff currentlyemployed in UK restaurants and are campaigning for decent pay. 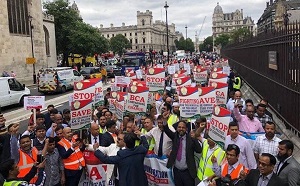 The BCA has organised protests to lobby Parliament.

Home Secretary Sajid Javid published a White Paper on immigration last December. The Paper suggested that the UK introduce a new visa allowing low skilled staff to work in the UK for 12 months. This is an idea the BCA has long favoured. Whether low skilled staff want to come to the UK for just twelve months, and then have to return home again, is another matter.

On a more positive note, the BCA is calling for an amnesty for undocumented workers so that they can then legitimately take up some of the current vacancies. They are also calling for an ethnic catering option to be offered within the national apprenticeship scheme, in the hope of training more UK workers to become qualified chefs.

Kamal Yakub, BCA President, said, “Removing the punishing takeaway clause is a positive step and is a well-documented demand that BCA has long been lobbying for – it will help restaurants from our curry industry that serve authentic Bangladeshi food to fill vacancies. For far too long, our restaurants have been suffering with a shortage of skills to fill vacancies.”

Oli Khan, BCA Secretary General, said, “We want any future immigration policy to be beneficial to the UK’s curry industry, which currently contributes £4.2 billion to the national economy. We will continue lobbying government and future leadership candidates in the days ahead.”

Saidur Rahman Bipul, Chief Treasurer, said, “BCA is not complacent and is concerned that the curry catering industry will still be struggling for staff. We will continue to lobby government to make further changes that are in the interest of our catering industry.”

•Read more about it:
Is BCA President right to back Brexit?
Not enough cooks to spoil the broth

2019-06-16
admin1
Previous: Get ready for a right royal run!
Next: Scintilla boost after completing derby double