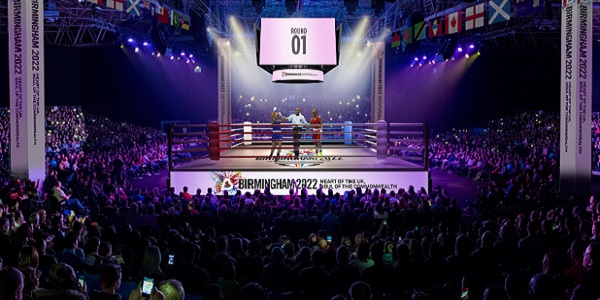 THE SPORT AND VENUE programme for the Birmingham 2022 Commonwealth Games was confirmed last week – leading to celebrations in Birmingham’s National Exhibition Centre (NEC).

Five Team England medallists joined Birmingham 2022 Chair John Crabtree and pupils from Mapledene Primary School as the announcement came that the NEC will be one of the key venue clusters for the Games, which will take place from 27th July to 7th August 2022.

Seventeen thrilling sports will take place over eleven days of action-packed competition at venues across the host city and throughout the West Midlands and beyond. Over one million tickets will be available, with sales beginning closer to the event. The venues are well established locations, experienced in hosting world class sport – with the exception of the new Aquatics Centre planned to be built in Sandwell.

John Crabtree, Chair of the Birmingham Organising Committee of the 2022 Commonwealth Games, said, “We were thrilled to welcome local schoolchildren and Team England stars to help celebrate the confirmed sport and venue programme for 2022, bringing a tiny flavour of the Games’ sporting spirit to the NEC, one of our main venue clusters. It’s another important milestone as progress continues towards Birmingham’s largest-ever global sporting and cultural event in less than four years’ time.”

Tracey Crouch, Minister for Sport and Civil Society, said, “I am particularly pleased that [the Games feature] an inclusive para-sport programme and equal medal opportunities for men and women.”

Cllr Ian Ward, Birmingham City Council Leader, said, “Birmingham has a global reputation as a sporting city… This city has a very strong track record of successfully staging major championships and athletes love competing in front of enthusiastic and knowledgeable Birmingham audiences. In 2022, the world’s top stars are guaranteed a warm welcome over what we can be sure will be 11 unforgettable days of sporting action in top-class facilities.”

Venues across the West Midlands will also help maximise and spread the involvement and benefits to regional communities close to Birmingham. Swimming and Diving will take place at the new Aquatics Facility in Sandwell and the triathlon, mountain biking, netball and lawn Bowls will all be staged at regional venues as far away as Coventry and Leamington Spa. Furthest afield, however, will be track cycling – which will be held over 100 miles away in the velodrome at Lee Valley VeloPark, built for the London 2012 Olympic Games.

Andy Street, Mayor of the West Midlands, said that he hoped the spread of the Games would ensure the benefits of the event would be shared out around the region.

The Organising Committee is currently conducting an Additional Sports Review and Costing to look at the possibility of including additional sports to the Games.