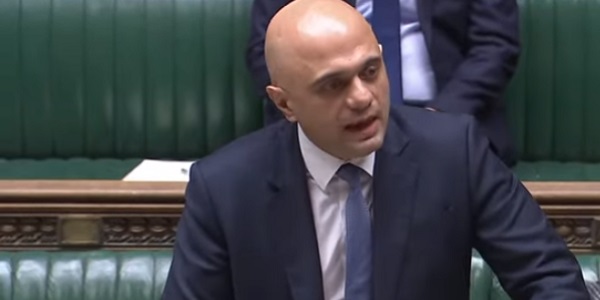 HAS SAJID JAVID forgotten what his job is? England’s Health Secretary has told the House of Commons that those who test positive for Covid can now come out of isolation after five days – not seven, and not ten.

The Government has always told us that its anti-Covid safety measures – such as lockdown, social distancing, and vaccination – were justified by the science of Covid. Those who tested positive for Covid were required to “isolate” (“keep away from people”) for ten days so they didn’t infect anyone. The ten days were cut to seven last month, and now they are down to five.

What happened?  Did Science email the Department of Health that morning and say oops, when we said ten days, we really meant someone was only infections for five days – despite the news that Omicron is more infectious than previous strains of the virus?

Or has Javid responded to pressure from industry, which can’t find workers to fill vacancies or cover absences or deliver the goods they are trying to produce? Or is he reacting to panic in the Treasury, which is struggling to come up with a strategy to pay the Covid bills and to keep schools open so parents can go to work?

Javid was Chancellor of the Exchequer from 2019-2020: it may be that he takes financial pressures more seriously than the science of contagion. He admitted to the Commons that the cut in the isolation period was aimed at keeping the economy “active”.
•He didn’t admit he needs workers back in their factories, depots and offices to keep the nation’s wages up so that income tax receipts don’t fall.
•He didn’t admit he needs workers travelling to their offices, paying their bus and train fares so the subsidy to public transport can be cut back.
•He didn’t admit he needs workers thronging the concourses and High Streets, buying their Skinny Mocha Lattes with vanilla sprinkles in the morning and nipping into the pub for a pint on the way home so we can keep the hospitality sector going, even though it is struggling to find workers.

Just at a time when infection, hospitalisation and death rates are falling in England, the Health Secretary is increasing social contact between those who are infected and those who are not. If infection rates start to climb again, this cut in the isolation period will have delivered a very short term saving and a long term financial and human loss.

●Read more about it:
The Met: safe in the hands of the high-ups?
Labour complacent as Aspire raise knife crime emergency