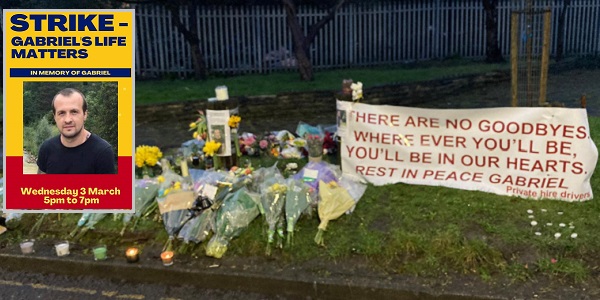 AS SAFETY CONCERNS drive more passengers to abandon crowded public transport and travel by cabs, drivers of private hire vehicles are becoming increasingly worried about their own safety. 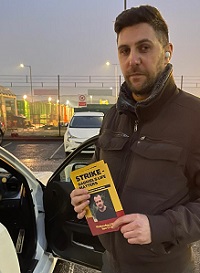 A driver joins the protest at Heathrow Airport.

Their concerns were described by Rema Diallo on The Tuesday Show earlier this week. Rema described how private hire drivers usually work for one or more of the four main booking platforms in London.  Passengers download an app onto their phone, and then use the app to book, track and pay for a ride. The app is like a virtual controller sat in a virtual minicab office.

The driver, however, is real – and they are on their own if a customer gets difficult. This is what Gabriel discovered last month while he was out on a job for the booking platform Bolt. Or at least it may be: as drivers are on their own, there are no witnesses if they are attacked. No one know what actually happened to Gabriel – just that he was found dead, in his vehicle.

He was not the first private hire car driver to be attacked this year, but he was the first to die – and many other drivers wonder whether he will be the last to lose his life. His death is a tragedy for his family and friends, but it has also moved his colleagues, who realise that they could have been in his place.

Rema is a committee member of the United Private Hire Drivers branch of the IWGB. He’s easy going and good to talk to – but when it comes to talking about safety measures, he gets very serious very quickly. He rattled off the safety measures which his fellow drivers want to see. These include:
•a drivers’ panic button in the cars, and plastic screens to separate the driver and passengers;
•booking companies to check the identity of passengers when they download the apps, so drivers can trace who is in their vehicle;
•a central record of customers whom drivers report as being abusive or otherwise out of order.

To highlight their concerns, drivers held a protest from 5pm-7pm on Wednesday, 3rd March.  Drivers parked up, turned their apps off, displayed a photo of Gabriel and held candles. Now they are waiting to see if the booking companies will listen.

●Watch Rema talk about the ups and downs of a life as a private hire driver:
The Tuesday Show

2021-03-05
admin1
Previous: Two teens guilty of Newham murder
Next: Who are the Ilford High Road thugs?