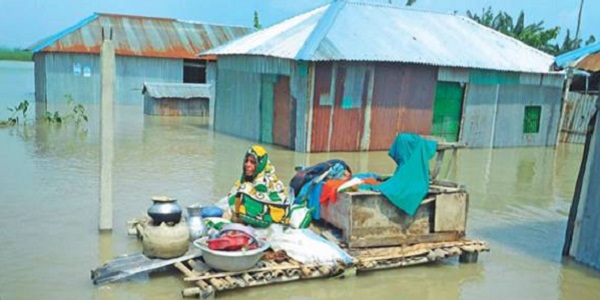 SWATHES OF South Asia are suffering from heavy monsoon rains which have caused flash floods, standing floods and landslips. The death toll is already at 300, with tens of thousands more displaced.

Over 1.5 million people are thought to have been affected by floods in Bangladesh – with Sylhet, Rangpur and Chittagong worst affected. The monsoon is by no means over, and the river Jamuna is swelling – threatening even worse flooding in the days to come.

On the ground in Bangladesh, Islamic Relief has found evidence of damage to infrastructure such as roads and communications, caused by the floods themselves, landslides and river bank erosion. The charity is responding by organising supplies of food and safe water, while also trying to improve public hygiene and sanitation.

Islamic Relief is one of the charities operating in Bangladesh which has received a share of £600,000 from the UK Government, which is intended to help relief get to stranded communities.

Tufail Hussain, Islamic Relief’s UK Director, explained, “The situation is absolutely dire. Our teams are closely monitoring the situation over the coming days to see if there is further flooding. Thousands have lost their homes and are now facing the elements without any kind of protection. People have also lost their means to make a living due to the damage to crops, livestock and fisheries. We also extremely concerned about the huge risk of disease spreading due to the prolonged floods.”

2019-07-29
admin1
Previous: England get ready for Australia Test
Next: Where are the warehouse robbers?