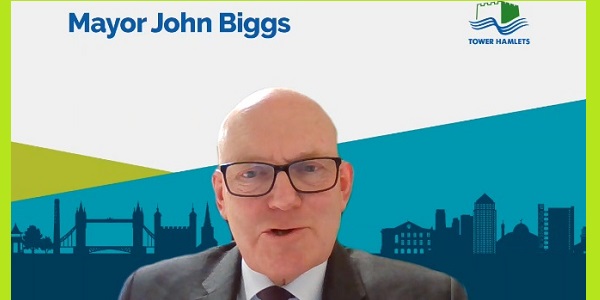 Executive Mayor John Biggs spoke at the Council's meeting, but did not answer public concerns about his walkabout.

JOHN BIGGS appeared in (virtual) public last night, 17th February – but he continued to ignore requests to explain why he had gone for a walk with Cllr Ehtasham Haque around the St John’s estate, E14.

The meeting was organised by Tower Hamlets Council and was intended to provide members of the public with an opportunity to ask questions about the Covid vaccine – and, for the most part, it did just that.

However, requests that the Executive Mayor explain why he had left home to walk around the St John’s estate with a local councillor were overlooked. Residents are taking steps to be aware of Covid safety issues and would like to be reassured by the Executive Mayor, the most senior elected political representative in Tower Hamlets, that he left home for one of the reasons permitted under lockdown restrictions.

Questions were submitted to the Council in advance, on the registration form which members of the public had to use to attend the meeting and put into the question list on Microsoft Teams on the day.  The Executive Mayor and the health experts answered other questions, but not these. 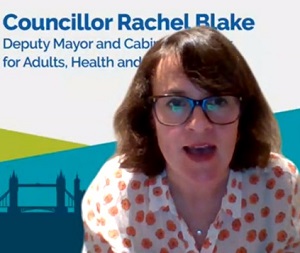 The meeting was chaired by Cllr Rachel Blake, Deputy Mayor and Cabinet Member for Adults, Health & Wellbeing. She ran through the questions which had been submitted in advance and then took questions submitted on the night – but did not take questions asking the Executive Mayor to give a public explanation.

In the meantime, a Tower Hamlets Council press officer has found emails sent to the press office by East London News: they were in the “Comms Inbox Spam Folder”.  It is sad to think that the Comms team doesn’t check its Spam Folder on a regular basis. However, although the emails to the Council have now been found, no substantive reply has been received.

The emails to the press office were copied to the Mayor and to Cllr Haque, neither of whom has replied either. Perhaps they don’t check their spam folders either.

Perhaps they are both very busy. Will an explanation be forthcoming? We can only keep trying.

2021-02-18
admin1
Previous: Active Musa tells us off for littering
Next: Rape in Goodmayes Park: police ask public for help