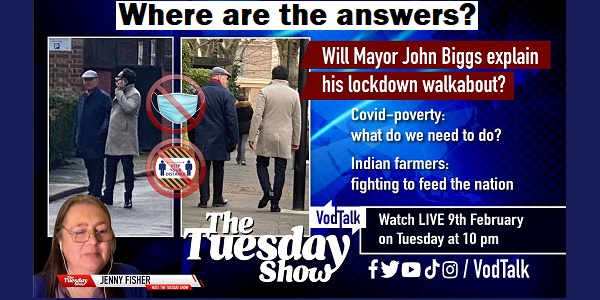 THEY ARE keeping it zipped – but members of the community are continuing to ask for Executive Mayor John Biggs and Blackwall & Cubitt Town Labour Councillor Ehtasham Haque why they were going walkabout on the Isle of Dogs this week.

The Tower Hamlets Executive Mayor was snapped, with Cllr Haque, standing at the bottom of the block of flats where Cllr Haque is believed to live. They two then walked off together along Launch Street. On the face of it, their actions seem to contravene the requirements of the current anti-Covid lockdown.

The story was broken in East London News, which emailed Tower Hamlets Council’s communications office – and the Mayor and Cllr Haque – asking them to give a public statement explaining why they were out on the streets, rather than staying at home, and whether they were out on work activities or were exercising together (perhaps they have formed a support bubble).  Two subsequent emails were sent to follow up the initial request: none of the three emails has been acknowledged or answered by any of the recipients.

The photographs were discussed on The Tuesday Show, a local news review programme which is live-streamed and available on demand on the VodTalk Facebook page. Host Jenny Fisher stressed that there must be an explanation of what the Mayor and councillor were doing, and it was only fair that an explanation should be provided to the public.  Studio guest Sunu Miah, CEO of the Docklands Football Club, agreed.

A number of callers then rang up to echo the call for answers to be given. The general feeling seemed to be that many members of the community are staying at home – so they deserve to hear why Executive Mayor John Biggs and Cllr Haque were outdoors together.

After the broadcast, East London News emailed the Council again, stressing that the community just wanted answers.  We can only hope they are forthcoming very soon.

●Read more about this story:
Mayor John Biggs and Cllr Ehtasham Haque step out together

2021-02-10
admin1
Previous: UK Sikhs call on Raab to back farmers in India
Next: Nine arrests in Barking robbery clampdown