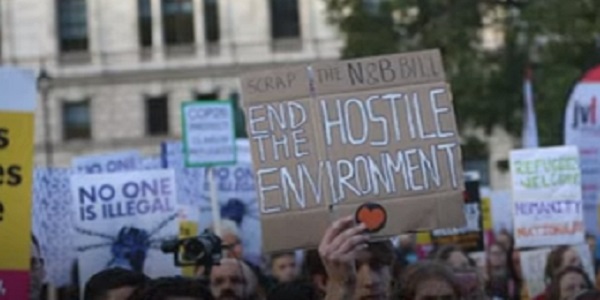 Demonstrations against the Bill have taken place.

THE HOUSE OF COMMONS has managed to pass the Government’s controversial Nationality and Borders Bill, which is now being debated in the House of Lords. It remains to be seen whether the “revising chamber” of Parliament will amend it before it returns to the Commons.

The Bill is supposed to lay down a new immigration system for the post-Brexit UK. Home Secretary Priti Patel has said that it will help the UK “take full control of its borders” by putting in place a “firm but fair” asylum system . However, there is widespread concern that it is far too draconian and unfair. The Law Society says it believes that the Bill contains “a number of measures which are, or are likely to be, incompatible with international law [and] damage access to justice.”

Among the elements of the Bill causing concerns are:
•it introduces a two-tier system for asylum seekers;
•it allows the Government to deprive a person of their British citizenship without giving them notice;
•it makes arriving in the UK without permission a new criminal offence.

The East London Mosque spoke for many East Londoners just before Christmas, when it added its name to a short statement entitled “Threat to citizenship is against British values”, which has been signed by a number of mosques and community organisations. You can read this statement here:
Statement

The two Tower Hamlets MPs have also responded to the Bill – in rather different ways.

•Apsana Begum, Labour MP for Poplar & Limehouse, tabled two amendments to the Bill and spoke about them in the Bill’s Second Reading in the House of Commons. One of the amendments would have abolished the “no recourse to public funds” condition applied to migrants. You can read her speech, in which she lambasts the “hostile environment” approach of the Government, here:
Speech by Apsana Begum MP

•Rushanara Ali, Labour MP For Bethnal Green & Bow, appears not to have made a comment specifically on the Bill and it does not feature on her website.  However, she did re-tweet a comment made by her party leader Keir Starmer, responding to news about deaths among migrants crossing the Channel.

The Nationality and Borders Bill is expected to return to the House of Commons next year, once the House of Lords has finished with it.

●Read more about it:
Nurse: Blair’s got out of his room again!
Tell Parliament: no more Afghanistans!