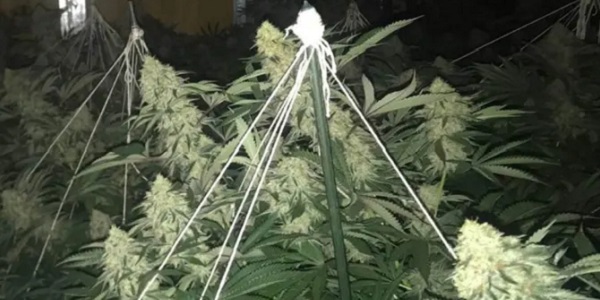 IT’S BEEN A busy time for police officers from the Metropolitan Police East Area Command (which covers Barking & Dagenham, Havering and Redbridge). They have closed and dismantled 72 cannabis factories over the last six months.

The police believe that people often don’t realise that cannabis is being cultivated in a nearby home, an empty property – or one of those little hidey-holes that exist on many estates. Police warn the public to watch out for these signs that someone may be growing cannabis – though, of course, they are not, on their own, proof that this is what is going on.

Bright light: cannabis plans need around 12 hours of bright light every day, so growers may black out windows or never open the curtains.

Fans or ventilation: farmers tend to use large extractor fans to give plants the ventilation they need. These fans make a low humming sound: if you hear this frequently, especially in colder weather, it may be cause for suspicion.

Smell: cannabis has a distinctive smell, which is particularly pungent in the last month of its three month growing cycle.

Comings and goings: cannabis farms are sometimes run in empty properties. If people seem to visit a property regularly for brief periods, this may be a cause for suspicion. There may be extra security (locks, etc.) on the property’s doors and windows.

Police point out that the growing and supply of cannabis is often done by people who sell harder drugs too – and that’s a world linked to violent crime and exploitation of the vulnerable. They believe that the number of cannabis factories has increased over the lockdowns of the last year and urge people to be on the look-out for suspicious goings on near their homes.

●POLICE RAIDED a suspected cannabis café in Osbourn Street, E1, at the end of January. As they entered the property, they became aware that men were jumping out of windows and on to the rooves of neighbouring buildings.

Police rounded up 24 men outside the building and found six men inside. All of them have been reported under the Health Protection Regulations and may be fined up to £200. One man was arrested on suspicion of immigration offences.  Police are satisfied that the premises were being used to smoke cannabis.

●Members of the public can report suspicions to the police over 101 or can speak to their Neighbourhood Police team. Alternatively you can contact Crimestoppers on 0800-555 111 and give information anonymously.