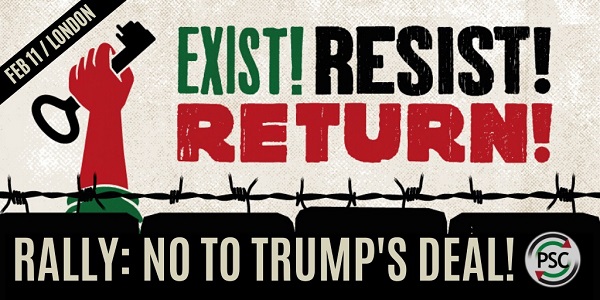 DONALD TRUMP is trying to bamboozle the world into abandoning the just claims of the Palestinian people – and it’s up to democrats across the world to protest and stop him.

The next protest action in the UK is a rally called by the Palestinian Solidarity Campaign (PSC). A wide range of speakers will talk about what Trump is proposing, why he has come up with a plan now – and how activists can organise across the world to stop him.

What the US President is putting forward as a “peace deal of the century” is little more than inviting the Palestinian people to give up all their demands. He has thrown in a small financial incentive for them to do so.

Trump suggests that the Palestinians give up any hope of having a viable state and instead accept allocations of land – pretty much at the discretion of the Israeli state. While international law has condemned the Israeli state’s settlements, declaring them unlawful, Trump suggests that the world allow Israel to keep those settlements – and build more.

Palestinian representatives and the Israeli state have been trying, during various past “peace negotiations”, to find a way to deal with their competing claims for jusrisdiction over Jerusalem. Trump has solved the conflict: by suggesting that the Palestinians just give up on pushing their claim. Perhaps worst of all, Trump is demanding that the Palestinians abandon their claims to a “right of return” of Palestinian people to the parts of Palestine from which the Israeli state expelled them by force of arms.

Trump’s proposals are not a genuine attempt to bring peace to the Middle East. They are a shrewd attempt to help his campaign for re-election as US President. This dangerous man must be stopped.

•For more information about the Rally and to register, go to:
Register