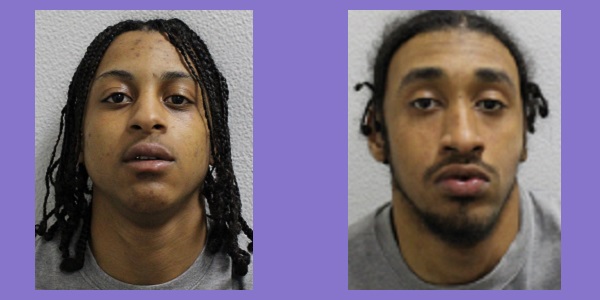 Romford teen jailed for having a gun

POLICE STOPPED a minicab as it went through Epsom on 19th March this year – a stop that was part of an operation against firearm offences. Immediately, one of the two back seat passengers admitted he had a gun in his pocket.

The gun which Santos was carrying.

It was the start of a process which saw Patrick Santos, 19, of Rose Lane, Romford jailed for possession of a prohibited weapon and possession of ammunition for a firearm without a certificate at a hearing at Croydon Crown Court last month. Santos was sentenced to five years in a Young Offenders Institution. He had pleaded guilty to the offences at a hearing at the same court back in May. 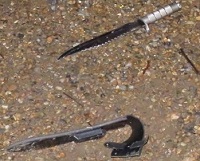 The knife and sheath found on Carr

Sentenced alongside him was Jordan Carr, 18, of Enfield, who was sentenced to one year’s detention in a Young Offenders Institution in respect of charges of possession of a prohibited weapon and being in possession of ammunition for a firearm without a certificate. Carr had pleaded guilty to those charges at the earlier hearing in May.

The judge also granted a Criminal Behaviour Order which states that the two offenders should not be in a public place in England or Wales together. The Order will be in place for four years.

When the minicab they were travelling was stopped, the two suspects were searched. Police found a revolver and ammunition in Santos’s jacket pocket. Police also found a zombie knife tucked into Carr’s waistband. They were taken to a South London police station, where they refused to answer questions. They were charged the following day.

Detective Inspector Glenn Butler, from Specialist Crime, said, “As a result of this investigation, two dangerous weapons have been taken off the streets. These weapons could have easily gone on to seriously injure, or even kill, somebody.

“Weapons such as these have absolutely no place on our streets. Bearing down on violent crime continues to be the Met’s top priority and officers are committed to taking dangerous weapons off the streets. We will continue to crackdown on criminals and bring them to justice, but we cannot tackle this issue alone.

“I would urge anyone who has information about someone carrying a weapon or about a crime to get in touch. We have recovered a number of weapons directly as a result of community intelligence. Please help us keep London safe.”