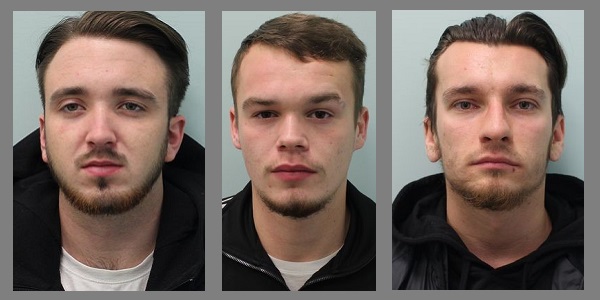 Six years for cold and calculated robbery in Chingford

THREE MEN who tried to organise a robbery have each been jailed for six and a half years. The three were found guilty of attempted robbery on 18th December 2020 at the end of a trial at the Old Bailey and returned for sentencing earlier this month.

The Court heard that Guy O’Neill met the victim, a casual acquaintance, by chance in a bar in Chingford on 14th September 2017. The victim was celebrating, as he had just been paid for a job, and was carrying around £5,000 in cash. When the car closed, O’Neill invited the victim back to his home, which at the time was in Willow Street, E4.

At around 2.40am, the victim left. Guy O’Neill directed his two accomplices to a footbridge over a railway at Beresford Road, E4. The victim duly arrived at the bridge, and the two would-be robbers confronted him. They struggled, and the victim managed to break away – with Lee O’Neill and Bak then running off and discarding the knife.  The victim then realised that he had been stabbed.  He was rushed to hospital, where it was found that he had five stab wounds and where he had life-saving surgery.

The victim told detectives what he had been doing that evening, which quickly led them to Guy O’Neill, whose telephone records quickly identified his accomplices.  The police also found the discarded knife, which gave them forensic evidence linking it to Lee O’Neill and Bak.

DC David Marnoch of the North East Basic Command Unit said: “This was an opportunist attack on an innocent man who was out celebrating. A chance meeting with Guy O’Neill led to a series of events which almost resulted in murder. His actions, in conceiving and planning the attack, and Lee O’Neill and Bak’s decision to follow the instructions and lay in wait for the victim before stabbing him, were abhorrent. This has been a lengthy and challenging investigation, but I hope now these three men have been jailed, the victim can begin to move on from the horrific events of that night.”

●Read more about it:
Teen charged with murder of Whitechapel woman
Woman, 80, suffers terrible ordeal as robbers break in