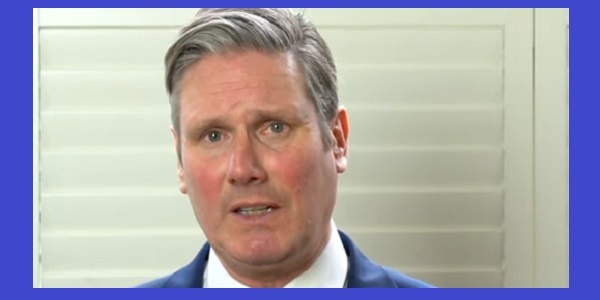 NEW LABOUR LEADER Keir Starmer has baffled Labour Party members and the wider public by coming up with a new demand for government action on the Corona pandemic.

What is he calling for – in what is pretty much his first public policy campaign as Labour Leader?

•OK: so he’s supporting calls for much more testing? No: try again.

•Then maybe he’s calling for other workers – in care homes, on public transport, in supermarket warehouses – to be issued with PPE too? No: not that either.

•OK: so if he’s not going for the angle of workers’ safety, it must be workers’ pay or terms and conditions – Labour winning back the traditional voters in the heartlands. He wants to make sure that workers of all statuses are properly paid during the lockdown? Or to support the trade unions in ensuring that people don’t lose their jobs as companies fold? Right? Wrong.

Keir Starmer has chosen today to demand that the Government announce its plans for removing the lockdown. It’s not that he wants the lockdown relaxed today or tomorrow – but he does want a plan, and he wants it to be public now.

Why? He says that if the Government does not release its plan for how the lockdown will be eased and/or removed, it will lose people’s trust. This is the Government that won over people’s trust just four months ago in a General Election. And these are the people who may well be regarding the infection and death rates as the first measure of whether government strategy is working well enough for the lockdown to be relaxed – not some vacuous emotion such as “trust issues”.

Ministers, civil servants and the leaders of relevant public services are clearly struggling with getting practical tasks sorted out – the jobs, such as PPE and testing and provision of intensive care, that real people need them to do. Is it really time for them to deprioritise this work in order to plan the exit strategy – like a chess playing devising the endgame before they’ve moved their first pawn?

A moment’s thought is all that’s needed to realise that any lockdown exit strategy would have to be based on then current circumstances (which are, presently, unknown) and would be all the better for being based on the experience of other countries (which has largely not happened yet). Therefore any strategy devised now would be a massive flow chart of alternative responses to scenarios that may not occur. What a waste of time!

Demanding that work on the lockdown exit strategy be prioritised ahead of work to help those affected by the Coronavirus is just putting the cart before the horse – or, in this case, the Leader in front of the bandwagon. And that is the clue.

The people clamouring for the Government to clarify now what its lockdown exit strategy will be are the press, at the daily briefings. We are used to mainstream journalists glossing over facts and/or eschewing intelligent questioning. We know they believe that their job is to Sound Very Cross and this will amount to scrutiny of the political executive by the free press. (The recent line of questioning on “please tell us now the outcome of the review that you will carry out next week” was a classic.)

For Starmer to be following in their shoes reveals a lack of common sense and political acumen. This is the man who torpedoed Labour’s 2019 General Election campaign by jumping on the bandwagon being driven by that minor political party the Lib-Dems and insisting that Labour promise the pro-Brexit masses a Second Referendum, in the hope they would come up with the answer he wanted to hear. Which suggests that we could probably not have hoped for any better campaign demand on the Coronavirus pandemic from him.

We shall have to prepare for more wishful thinking from Labour (especially when it comes to Exit Strategies), rather than answers for the problems in the world that exists down here on Planet Voter. Oh dear. (Anyone up for calling for a Second Leadership Election?)

●Read more about it:
Starmer wins: it’s back to Blairism
Corona & class: Part 1 – how a virus divided society