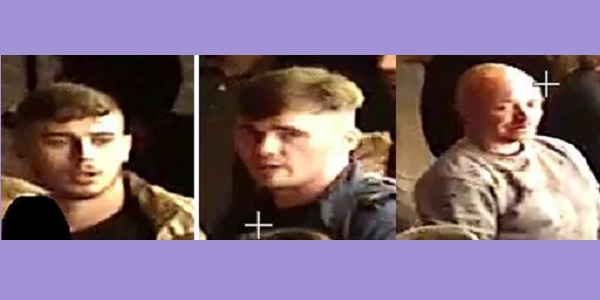 CCTV image of the suspects, released by Met Police.

IT BEGAN AS an ordinary evening, with a 34 year old man going out for dinner and drinks in East London. He left a venue in Brick Lane at approximately 3.30am – and was then assaulted by three men.

The victim was hit in the face with a metal object, and verbally assaulted. The police are treating the incident as a racially motivated hate crime. The incident happened on Sunday, 25th July, and police have now released images taken from CCTV cameras.

Detective Constable Caelen Matthewson-Davies said, “This was an unprovoked attack on an innocent victim who was enjoying a night out in Shoreditch. The streets of London should be a safe place for people when they are out and there is absolutely no place for the violence that we saw here. CCTV showed these men walking around the street trying to start fights with people.

“I thank the victim for his support throughout the investigation – during what must have been an awful time. The victim suffered severe facial injuries and has had reconstructive surgery. He is also seriously emotionally traumatised and has been having panic attacks.

“Luckily the entire attack is captured on CCTV and we are appealing for the public’s help to trace the men pictured. If you recognise them, witnessed the incident or have any further information, please don’t hesitate to contact police.

“We stand against all incidents of racism and urge anyone impacted by crimes of this nature to urgently call the police. The Met continues to work to make the streets of London a safe place for all and remains dedicated to putting violent offenders behind bars.”

●Anyone who can help identify the suspects is asked to call police on 101 quoting CAD 4370/26Aug. Alternatively you can contact Crimestoppers on 0800-555 111 and give information anonymously.