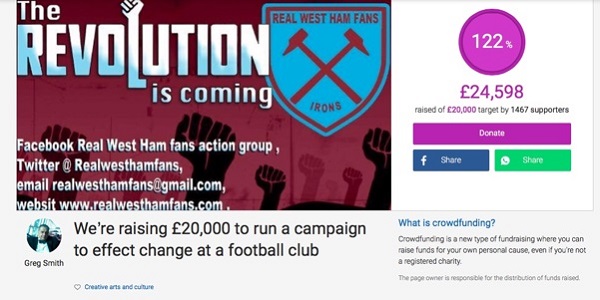 A GROUP OF West Ham fans has set up the Real West Ham Fans Action Group (RWHFAG) to express dissatisfaction with the Club’s Board of Directors – and the changes which have come about since 2006, when the Club moved from Upton Park to the London Stadium.

The Action Group has set up a JustGiving crowdfunding page, which has been shared over 1,000 times and has raised over £24,000. On that page RWHFAG Organiser Greg Smith explained that when the Club moved, promises were made which included, “bringing the crowd closer to the pitch and a comprehensive display of the club’s heritage both on the external stadium facade and facing the playing surface.”

The Group believes that promise has not been kept. Greg also says, “Ultimately RWHFAG want a ground fit for football and an experience fit for fans.”

Messages on the JustGiving Page show that longstanding fans are concerned with the results of the move. Messages include:
•“We should never have moved. Time to take action before more of our identity is stripped away.”
•“Been traveling from Staffordshire to watch my club since 1974. I am a proud hammer and West Ham United are my soul.”
•“They want unity – Unity is what they’ll get. All sorts of Groups coming together here with one common aim.”

West Ham supporters are preparing a march before their home game against Burnley on 10th March to protest against the club’s board.

•To support the appeal, go to:
https://www.justgiving.com/crowdfunding/rwhfag