Don't Miss
Home / Sports / Allan Dick: “Keep doing your best, because if you do, you can reach the sky.” 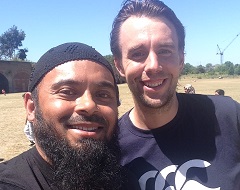 Allan Dick: “Keep doing your best, because if you do, you can reach the sky.”

Hockey Development Officer and PE Co-ordinator Allan Dick represented Scotland on the international stage, winning 37 caps and played at the 2006 Commonwealth Games in Melbourne, Australia. The Scotsman’s career highlights include playing in the European Trophy and taking part in a pulsating penalty shootout against China and subsequent third place finish in the 2009 World Cup Qualifier in New Zealand.

“After the euphoria I experienced the downside for a short period,” he said. A knee operation in 2010 meant I missed the 2010 Commonwealth Games in Delhi. I’ve recovered enough to enjoy a fruitful career and I’m blessed in that sense. Hockey has enabled me to travel the world, from Melbourne down under to spending the winter winning the league and playing the European Club Championships with Inverleith Hockey Club.”

Dick started hockey at a young age. “My parents were accomplished players and encouraged me and my brother to play hockey. I took after dad and became a goalkeeper. I’m thankful for their input as it has helped me achieve so many dreams. A child can perform wonders if their parents and those around them encourage and support them.”

The Southgate Hockey Club star who made his Scotland debut in 2003 attended a Tag Rugby tournament held by the Tower Hamlets Youth Sport Foundation in conjunction with Clifford Chance at Millwall Park. He said: “It’s a great event organised by a great charity. Magic things do happen here. I know as I’ve been a part of this journey with the foundation.”

Dick was a Queen’s Baton Bearer at the 2014 Commonwealth Games in Glasgow. “It was a tremendous honour and a life event and experience I will always treasure,” he proudly reminisces. I’m proud to have been chosen to be a part of Scottish history.”

The Dundee United fan from Kirkaldy, which is ten miles north of Edinburgh, is the PE co-ordinator at Cubitt Town Infants School on the Isle of Dogs, London. His football hero is former Dundee United and Scotland Under-21 star Alan Main, who would have had many full caps had it not been for the small matter of the joint presence of Jim Leighton and Andy Goram blocking his path to the Scottish number one jersey. “Naturally it has to be a goalkeeper, and Alan Main was special to me. He was a part of the great Dundee United team that reached the UEFA Cup final and although I was too young to remember I am fully aware of those.”

Dicks has been fasting during the holy month of Ramadan. He became a Muslim four years ago and keeps the full fasts. “The last few years has seen challenging heatwaves for British Muslims who observe the fasting months,” he said. Allan has taken it in his stride. “Ramadan is a lot more than just starving yourself. It’s about self-contemplation, improvement and reflection. The obvious hard act is training. I manage it fine, but it isn’t fun at all,” he laughs.

“Looking after yourself is a science and be it Ramadan or any other month, it’s essential that people take care of themselves. As an educator I relay the same messages and advice to everyone, regardless of their age – and that is to enjoy your sport, keep active and keep your body stocked with the right amounts of water and the correct nutrition.”

As a goalkeeper Dick has faced some difficult opponents: “My most difficult and the trickiest customer I have faced is my Southgate Hockey Club team mate Darren Cheesman. He is simply unbelievable and will spot opportunities in play that defy belief – an incredible talent who is also a totally amazing coach. He is a forward and I’m a goalkeeper, and we have had some very interesting duels.”

Dick is happy with his life. “I have played for my country, play hockey regularly and teach sports for a living. What’s not to be thankful for? I hope to carry on playing for another four to five years before I hang up my gloves and try to forge a career in coaching. I’d love to be the Scotsman who makes a difference with England Hockey. As I say to the kids: who knows? bigger and better things could be just around the corner. Keep doing your best, because if you do, you can reach the sky.” 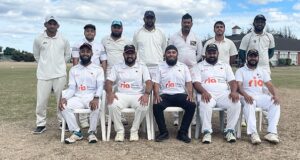 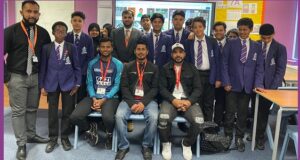