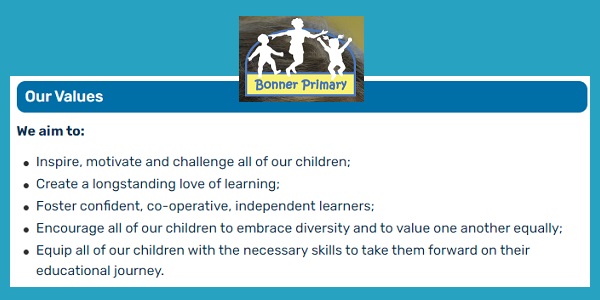 WHAT MESSAGE does it send out when a school closes to assist its children (and staff) to mark a Christian holy day, but remains open on a Muslim holy day? That’s the question that Bonner Primary School in Tower Hamlets has to consider.

The last day of term at Bonner Primary school is Tuesday, 20th July – which will also be the feast of Eid ul-Adha. Pupils will have to choose whether to follow the secular law of the land and attend school on this special day of the academic year, or to follow the rules of their religion and spend the day celebrating Eid ul-Adha.  We put the following concerns to Bonner School – and we were surprised by the answer we received.

Council advice
Tower Hamlets Council sets out term dates for community school in the borough on its website. These add up to seven more days in school than the law requires, allowing schools to do INSET (training) and take days of for Eid. The Council advises schools to take “five INSET days and two additional days holiday at Eid” within those term time days.
Tower Hamlets Council website page on school term dates is here.

Moveable holy days
Bonner school took its Easter break from 29th March to 9th April in 2021, in accordance with the advice of Tower Hamlets Council. It is not closing for Eid ul-Adha, contrary to the Council’s advice. Why does the school follow the Council’s recommendations in respect of a Christian holiday but not a Muslim one?  What message does this send to the children, staff and the wider community?

Families with children at two or more schools
Working parents and carers are not usually fond of INSET days, as they have to arrange childcare – which may even mean that they have to book annual leave from work. Some parents have children in more than one school – perhaps primary and secondary schools.  If the schools have their INSET training on different days, the parents can end up take up to two weeks off work – a considerable portion of their annual leave. The advantage of a boroughwide approach is that working parents know that all their children will be off school together – needing only one day’s childcare. Why does Bonner Primary School depart from the Council’s advice – giving working parents/carers more headaches?

Equalities
Bonner Primary school’s Equality and Diversity Policy, which is on the school website, states that the school’s vision and aims support certain articles in the UN Convention on the Rights of a Child, including:
“Article 30: Every child has the right to learn and use the language, customs and religion of their family”, and
“Article 31: Every child has the right to relax, play and take part in a wide range of cultural and artistic activities.”
By not respecting the right of Muslim children to celebrate the holy days pertaining to their religion, would appear to be in breach of Article 30 (“customs and religion”) and Article 31 (cultural activities). Is the school is guilty of religious discrimination and, as the majority of Muslims in Tower Hamlets are of Asian heritage, race discrimination too?

The answer
It is not unusual for the Council to give press statements on behalf of community schools in the borough and it was indeed the Council’s press office which responded to the questions we put to the school – with the following statement for publication.

“A Tower Hamlets Council spokesperson said:
“Following consultation with all staff, Bonner Primary School’s governing body took the decision to open as usual over Eid Al-Adha to avoid disruption for families who do not celebrate Eid. Children are allowed to take authorised absences to celebrate Eid Al-Adha, and staff are allowed to take additional leave in line with their contractual conditions. The school has never previously closed for Eid. Inset days and additional holidays are determined by individual schools and their governing bodies, not by Tower Hamlets Council.”

As you can see, the questions about discrimination – Muslims being treated differently from Christians and whether this is in accordance with the school’s Equality policy – are not addressed.

The point about closing a school for Eid causing disruption to families which are not observing Eid seems bizarre.  If Muslim pupils take an authorised absence, the remaining pupils will be disrupted by having many of their classmates absent.  Teachers cannot teach substantive material which the whole class needs to follow – so Eid will be a rather flat day for those who are in school.

Do Muslim children’s lives matter?
Regardless of all the points above, one truth remains about Bonner Primary School.  If you are a Christian child, your school will be closed to all children on your major religious holidays.  If you are a Muslim child, you will be allowed to take authorised absence and miss a day’s teaching.  How can that send a message to those Muslim pupils that they are being respected under the UN Convention?

In the 1970s and 1980s – and this will be a painful memory for some of our readers – there were battles in the UK over whether Muslim girls could wear trousers at school rather than or as well as skirts.  Now, trousers are an option in many school uniforms – and girls wearing them do not feel they are demeaning. If we are now to have an argument over equal treatment on the matter of religious observance, many Muslims in the community will feel that we have just found ourselves back at square one.

●If you know of any other schools in Tower Hamlets which do not take a flexible day off for Eid, please email us at:
info@eastlondonnews.co.uk
All correspondence will be kept confidential.

●Read more about it:
Island Network had a busy month of May
LEA pupils launch “Cleaner Community”programme