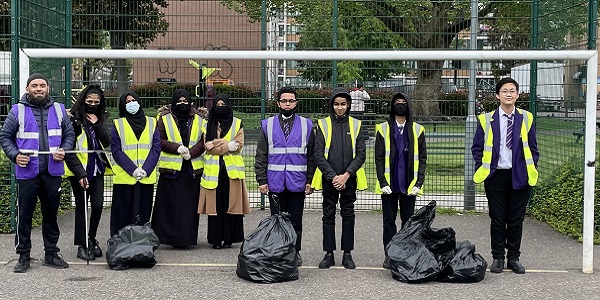 LONDON ENTERPRISE ACADEMY, in partnership with the #LittleLitterLeague, has launched a “Love Your Neighbourhood” initiative.

This revolutionary campaign, to be led by the Whitechapel school’s pupils, will promote and raise awareness of cleaner communities. As a direct result of their volunteering, it is hoped that whole localities will be educated and mobilised to take pride in maintaining their streets, green spaces and respective neighbourhoods.

Speaking after the youngsters made their litter picking debut, Headteacher Ashid Ali commented, “We not only have talented youngsters, but also conscious young people who are dedicated to helping improve the lives of others. These pupils have set an example which will inspire countless other young people all over the world. Their activism and dedication will motivate others to get involved in positive civic and grassroots activities.”

He went on to thank the LEA’s staff and the Little Litter League for their support.