Don't Miss
Home / Culture / ENO’s operas are back on screen 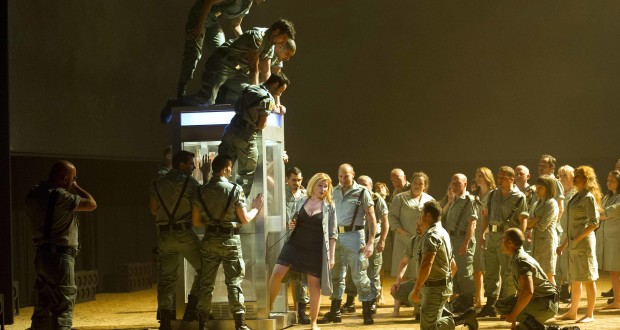 ENO’s operas are back on screen

The English National Opera (ENO) will once more be beaming performances from its home in the London Coliseum to 350 cinemas across the UK. Tickets are now on sale for the three performances, which are:
La Traviata – Wednesday, 15th March
The Pirates Of Penzance – Tuesday, 19th May
Carmen – Wednesday, 1st July

ENO Screen, a partnership between English National Opera and AltiveMedia, was launched in 2013. ENO Screen’s live cinema broadcasts are as distinctive as ENO’s live work in the theatre, creating a unique cinematic experience for audience members across the globe. Multiple HD cameras provide unusual angles and close up views of the action on stage and in the orchestra pit, giving a true cinematic experience for audiences.

La Traviata – Wednesday, 11th March 2015
ENO presents the first revival of Peter Konwitschny’s celebrated production of one the most popular operas of all time. La Traviata tells the devastating tale of Violetta, the beautiful Parisian courtesan who shatters convention and sacrifices everything for love. Verdi’s masterpiece combines compelling characters with hugely moving and instantly recognisable melodies making it one of the most emotionally engaging and popular operas of all time.
This Olivier Award Nominated production cuts to the very heart of the opera’s themes of passion, love and tragic death with a modern, uncluttered staging and a running time of one hour and 50 minutes (no interval). La Traviata is sung and surtitled in English

The Pirates Of Penzance – Tuesday, 19th May 2015
Film maker and director Mike Leigh will make his opera directing debut with this eagerly anticipated new production of Gilbert & Sullivan’s sparkling comic masterpiece. In a hilarious production, in which comedy and romance combine with surprising twists and turns, The Pirates of Penzance leads us into a swashbuckling world of orphaned pirates, flat-footed policemen and beautiful women.
The Pirates of Penzance will be broadcast live in over 400 cinemas in the UK and selected screens worldwide and seen by over 33,000 people in London, making it one of the most widely seen operas of the year.
The Pirates of Penzance is sung and surtitled in English and has a running time of two hours, 20 minutes.

Carmen – Wednesday, 1st July 2015
Set during the dying days of Franco’s Spain, the first revival of Calixto Bieito’s acclaimed 2012 production has been enjoyed by audiences across Europe. Bizet’s dazzling and seductive score evokes all the sounds and sizzling atmosphere of Spain through some of opera’s most famous melodies, from Carmen’s seductive Habenera to the Toreador’s stirring parade. This visually remarkable production offers a powerful combination of love, lust and betrayal against the symbolic backdrop of the Spanish bullring.
Carmen is sung and surtitled in English and has a running time of two hours and 45 minutes.

•Tickets and further information can be found at www.eno.org/enoscreen