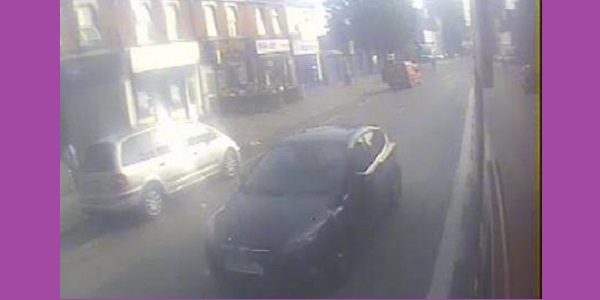 Police have released this CCTV picture of the Ford Focus they are trying to find.

Firearms back in Newham’s Wellington Road

A BLACK FORD FOCUS motor vehicle with several occupants drove down Waterloo Road, Newham, and into Wellington Road on 30th May. The vehicle came to a halt in the middle of the road – and one of the passengers waved a firearm at a group of men on the street.

This threatening behaviour came just under a year after a similar offence was committed in the same road. That earlier incident led to Peter Brown, 29, of Stanford-Le-Hope receiving a massive jail sentence of over ten years in April this year.

The man who was seen waving a weapon in May was described as a black man in his 20s, wearing a silver or grey hooded top and a black jacket. As he brandished the weapon, eyewitnesses scattered. The Ford Focus then drove off towards Cemetery Road. It is thought that it went onto Odessa road, left into Dean Street and right into Field Road, before going on to Forest Lane.

There were no reports of shots being fired or anyone being injured, but police were keen to point out that using a gun to threaten people is still a very serious offence. They would like to trace witnesses to the incident – thought to be a small crowd of young men but also a woman who had a child with her.

Detective Sergeant John Macleod of Newham CID is investigating. He said, “This would have been a terrifying incident for all those involved. Anyone who has information can be assured that they can contact us in the strictest of confidence. Please speak to us so we can catch those responsible.”

•Anyone with information is asked to call Newham police via 101, quoting reference 7543/30May. Alternatively, you can call Crimestoppers on 0800-555 111, where you can give information anonymously.