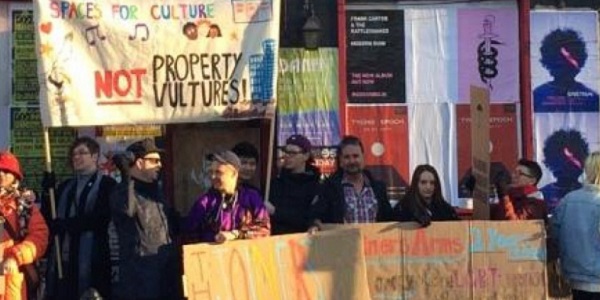 PHOTO: Friends of the Joiners Arms

Joy at the Joiners as temporary queer venue in sight

IT WAS JOY all round as the campaign to secure a queer venue – a replacement for the much loved and sorely missed Joiners Arms in Hackney Road – seemed to be moving a step nearer to its goal.

The Joiners Arms was established as an LGBTQ+ pub in 1997 and soon became a safe space for a community that is often the target of hate crime. It was a welcoming and inclusive venue which soon became a centre for political activity, free expression and relaxation for a whole community. Sadly, the site on which it stood was purchased by developers in 2015. The Joiners Arms closed, and the future of the site has been unclear ever since.

Nearly three years later, much water has passed under the bridge. On 14th January, Tower Hamlets Council’s Development Committee will consider a planning application to build a hotel on the site. The Friends of the Joiners Arms believes that they have secured commitments from the developer to provide a new venue in the development – and to contribute cash towards the provision of an interim venue while the development is built. The money will be paid to Tower Hamlets Council, which has not yet revealed how it will provide the interim venue.

Amy Roberts, Chair of Friends of the Joiners Arms, said, “We have always said that the best thing for the local and wider queer community, and existing residents, would be provision of much needed social housing and the re-opening of the Joiners Arms as a unique, wonky, community-run queer pub. If the development goes ahead, we need to ensure the queer community has a long-term replacement venue plus a meanwhile space to compensate for years of enforced closure. However, there are some serious outstanding issues which threaten the long-term viability of the future venue and the well-being of the local residents – and these should not be pitted against each other.”

The Friends of the Joiners Arms is an award winning campaigning group and believes that this is the first time a developer has agreed to provide an interim queer venue as a planning condition.  A planning application does not guarantee that a development which actually be built. The Friends and other organisations representing the local community deserve their celebration – but will have to keep on the case to ensure that promises are kept.