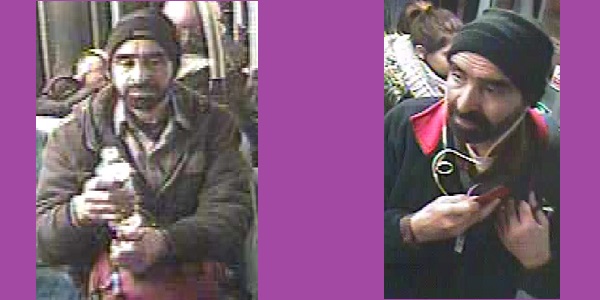 Images of the suspect

WHO IS this man? Police would like to interview him in connection with two sexual assaults – both carried out on buses in the Newham/Ilford area.

The most recent attack came at around 7pm on Sunday, 21st January this year. The suspect got onto a route 150, travelling eastbound from Ilford Town Centre, near Ilford Cinema – and sat down next to a woman travelling at the back of the bus. 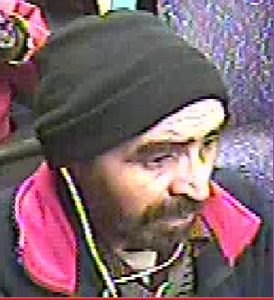 Once he was sat own, the man began touching the victim in a sexual manner. She shouted at him and he stopped.  The suspect tried to cover his face and get off the bus – but before he could do so, the woman he had molested managed to take a picture of him on her phone.

The suspect is described as an Asian man in his mid 30s, with a dark beard and wearing a black beanie hat. He was wearing a light coloured shirt with a brown jumper on top, and a black jacket with a purple inner lining on top of that. He was also carrying a black rucksack.

The suspect matches the description of a man who committed a similar offence in January 2015 on a number 25 bus in Stratford.

The investigation is being carried out by officers from the Roads and Traffic Policing Command. Their Detective Constable Julia Coney said, “This man is sought in connection with a sexual assault incident on board at least two buses that we are aware of. We will not tolerate any form of sexual assault and strongly urge anyone who has been a victim of in this type of crime to call police and report it.”

•Anyone who knows who this man is or who has any other information which could assist police in their investigation is asked to contact the Roads and Traffic Policing Command via 101, quoting reference CAD 6414/21Jan18. Alternatively, you can call Crimestoppers on 0800-555 111, where you can give information anonymously.

•Read more about it:
Where is Anton Ward?
Police look for Tower Hamlets teen hammer attacker