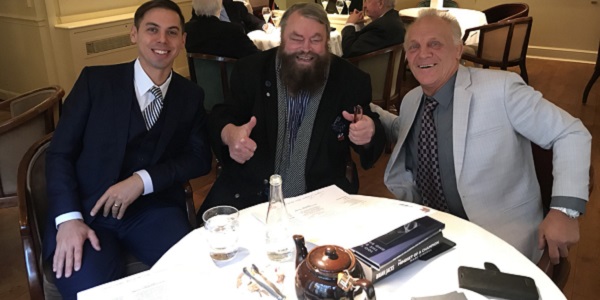 The life of Brians

TWO BRITISH “LEGENDS” – a word often used all to freely these days but one that definitely applies to these gentlemen – recently reunited and reminisced over lunch at Langan’s Brasserie.

In one corner was Brian Blessed, the 84 year old boisterous British actor known for his hearty, king-sized portrayals on film and television – a giant of a man accompanied by an eloquent wit and booming operatic voice.

In the other corner was Brian Jacks, the 71 year old former Olympic judo medalist and British and European Champion. Jacks is regarded by many as the best judoka this country has ever produced who followed up his career in competitive judo by taking the BBC’s Superstars by storm, smashing all kinds of records and taking the programme to new levels.

The pair first met in 1963, at Tiger Joe Robinson’s judo club in Orange Street, London – a basement club that had a bar upstairs called “Jacks”, where Spike Milligan, Harry Secombe and Peter Sellers used to hang out. Jacks, then 17, helped Blessed with a few judo moves that he needed in his role as PC “Fancy” Smith in BBC’s television series Z-Cars.

Their careers took them all over the world – until they met again in December 1980 when Blessed contacted his old friend to ask him to help him with some judo movies for his role as Prince Vultan in the movie Flash Gordon. They met at the London Judo Society, where Jacks had the shock of his life when Eamonn Andrews, dressed in full judo attire, completely surprised him with his big red This Is Your Life book.

Nearly 40 years later, they met again so that Jacks could present Blessed with a copy of his recently published autobiography: Brian Jacks, the Mindset of a Champion with Marc Gingell. Blessed has written the foreword for the book.

Blessed, who’s spent time in the Himalayas and been mistaken for a Yeti, is still going very strong and is an avid adventurer still determined to explore the world – and space beyond it. For those less adventurous, he will be on tour again in April.

Jacks flies to Thailand in a few days, where he’s based for much of the time these days. As he says, Thailand’s climate is perfect for his aching bones that have taken quite a bashing over the years. He will be back in the UK in April for the start of his 2018 100 Day UK Tour, and there are serious people talking about turning his book into a film. He’s also planning his 60 years in Sport/Judo Testimonial Charity Dinner later this year.

•Brian Jacks, the Mindset of a Champion with Marc Gingell can be purchased from www.brianjacks.co.uk or by emailing brianjacks129@gmail.com.

•Read more about it:
Girls enjoy debut judo competition
The mindset of a champion