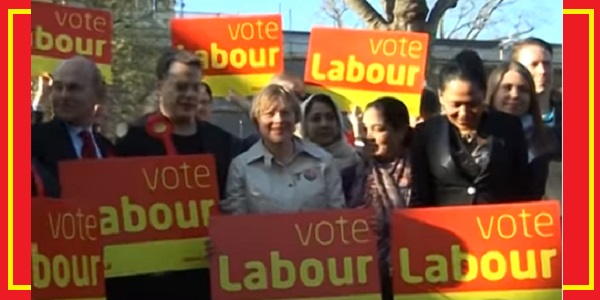 Labour enlists the help of a comedian to launch their 2014 manifesto. Eddie Izzard was there too (second from left), but John Biggs failed to win the mayoral election that time around.

THROUGHOUT the month of July, our “thought for the day” spot featured individual Tower Hamlets Councillors – recording something they have said and giving their apparent position on the Tower Rewards dispute with the Council workforce.

Now the month is over, we have learned two things. First, who is the most popular councillor, who inspires hits on our website? Second – contacting a councillor is not as easy as it should be.

The Popularity Poll
To be honest, we thought the Feature would attract relatively little attention – so we were surprised and delighted to see that some of our “Thoughts” turned up in the East London News Top 20 most viewed articles stats. Strangely, though, it seems that popularity is in most – but not all – cases in inverse proportion to the councillor’s rank and verbosity.

The percentage is the share of the top 20 viewing figure.

The Response Rate
We initially had feedback from our readers that many of our featured councillors have not responded to emails which the readers have sent them.  Some readers have emailed two or three times. However, feedback is now coming in that readers who have been persistent have eventually got an answer – so keep trying. Here are some steps you can take to try to get an answer.

•Email the councillor again.  They may not have looked at your email because they were on holiday – or your message may have got lost in a deluge of emails.

•Our contact details also give the Councillor’s phone number: text them to remind them you are waiting for an answer to your email.

•Email or text Cllr Kevin Brady, full-time talent agent and Chief Whip (responsible for Labour Group discpline), and complain that you are not getting an answer. Contact him here:
07943-159 386
Kevin.Brady@towerhamlets.gov.uk

•Contact one of the Labour Parties in Tower Hamlets (or both) and complain that their councillor(s) are not responding to you.  It’s difficult to work out what their current contact details are, but they may be:
Bethnal Green & Bow
info@bgblabour.org.uk
@bgblabour
Poplar & Limehouse
@LabourPandL

Some of our readers have compared notes and discovered that their councillor is sending out identical responses – even to different inquiries.  If the councillor you emailed has send you a standard response, or not answered your specific questions, they will appreciate a reminder from you of the points they have not commented on.

Remember – you can contact any Labour Councillor in the borough.  You don’t have to restrict yourself to just the Councillor(s) in the ward where you live.  And don’t forget that anyone can contact Executive Mayor John Biggs.