Don't Miss
Home / Featured / At last! The Mayor’s computer is talking to us! 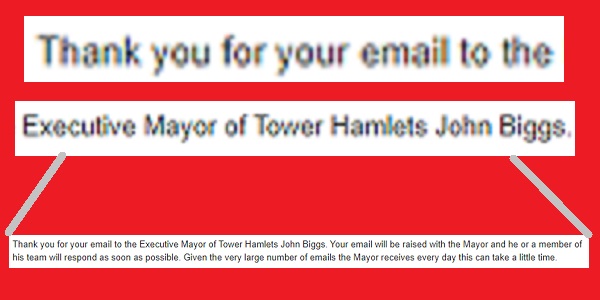 The first paragraph of the automatic acknowledgement from the Mayor's email address.

At last! The Mayor’s computer is talking to us!

WE ARE STILL waiting to hear from the Executive Mayor – but today we have taken a step forwards in our attempt to offer John Biggs and Cllr Haque the opportunity to tell the public why they were stepping out together on 6th February.

On that date, we received two photographs showing Executive Mayor John Biggs and Labour Councillor Ehtasham Haque coming out of a block of flats which is believed to be where Cllr Haque lives.  The pair then walked along the road – apparently without keeping a social distance apart.

The photos had some exposure on social media and, probably inevitably, local residents began asking why the two were stepping out together – at a time when lockdown restrictions stated that everyone should be staying at home, except for a few reasons such as going to work if you can’t work from home or doing necessary shopping.

We took the view that the Executive Mayor and Cllr Haque should be given an opportunity to explain what they were doing out together: that is, they should not be pre-judged, but they should be held to account.

The Council protocol is that if a news outlet wishes to have an official statement from the Council or an elected Councillor, they should approach the Council’s press office – aka the “Communications Team”.  Accordingly, we emailed the Team asking for a statement – and we copied the Mayor and Cllr Haque into the email.  We chased up the email, but still there was no answer. 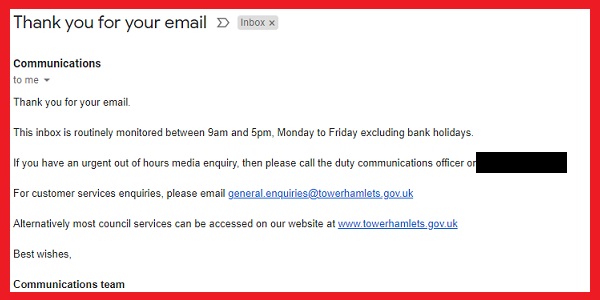 The acknowledgement from the Communications Team

By 22nd February, we knew that the Communications Team had our email – but still we had no reply.  We then emailed the Team again, attaching all previous correspondence. This time, we sent the email from our gmail address (which we don’t use very often) – again, copying in the Executive Mayor and Cllr Haque.  Imagine our delight when we received two automatic acknowledgments – one from the Communications Team and one from the Executive Mayor’s address.

Now that we know they have received our emails (in the case of the Communications Team, for the second time), we await the Mayor’s official and substantive reply.  When we receive it, we shall share it with you.