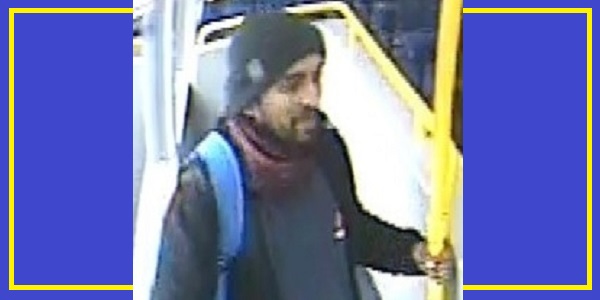 POLICE HAVE released a CCTV image of a man they wish to speak to in connection with two incidents on public transport in Tower Hamlets.

Incident 1
Just after 1.30pm on Thursday, 15th March, a 21 year old woman was travelling on the upper deck of a 135 bus heading from Old Street to Westferry station. A man got onto the bus as it made its way along Commercial Road and made his way to the upper deck. He tried to make conversation with the young woman and then exposed himself to her. She moved away from him and he got off the bus near Westferry DLR station.

Incident 2
At approximately 8am on Wednesday, 28th March a 23 year old woman was sitting on the upper deck of a 205 bus going from Paddington station to Bow Church station. The suspect was also on the upper deck. He went up to the woman and exposed himself to her.

The suspect is described as an Indian man in his 30s, with a dark beard and moustache. He appears to be the same suspect who is being sought by police in connection with similar incidents of sexual assault in Ilford and Newham.

Detective Constable Jo O’Connor of the Met’s Roads and Transport Policing Command said, “Both women were understandably very shocked by these incidents and no one should be subjected to this. If anyone has any information that could help us identify this man then please get in touch.”

•Anyone who can help identify the suspect or has any other information is asked to contact police on 101 quoting reference 4131/16 March. Alternatively, you can call Crimestoppers on 0800-555 111, where you can give information anonymously.